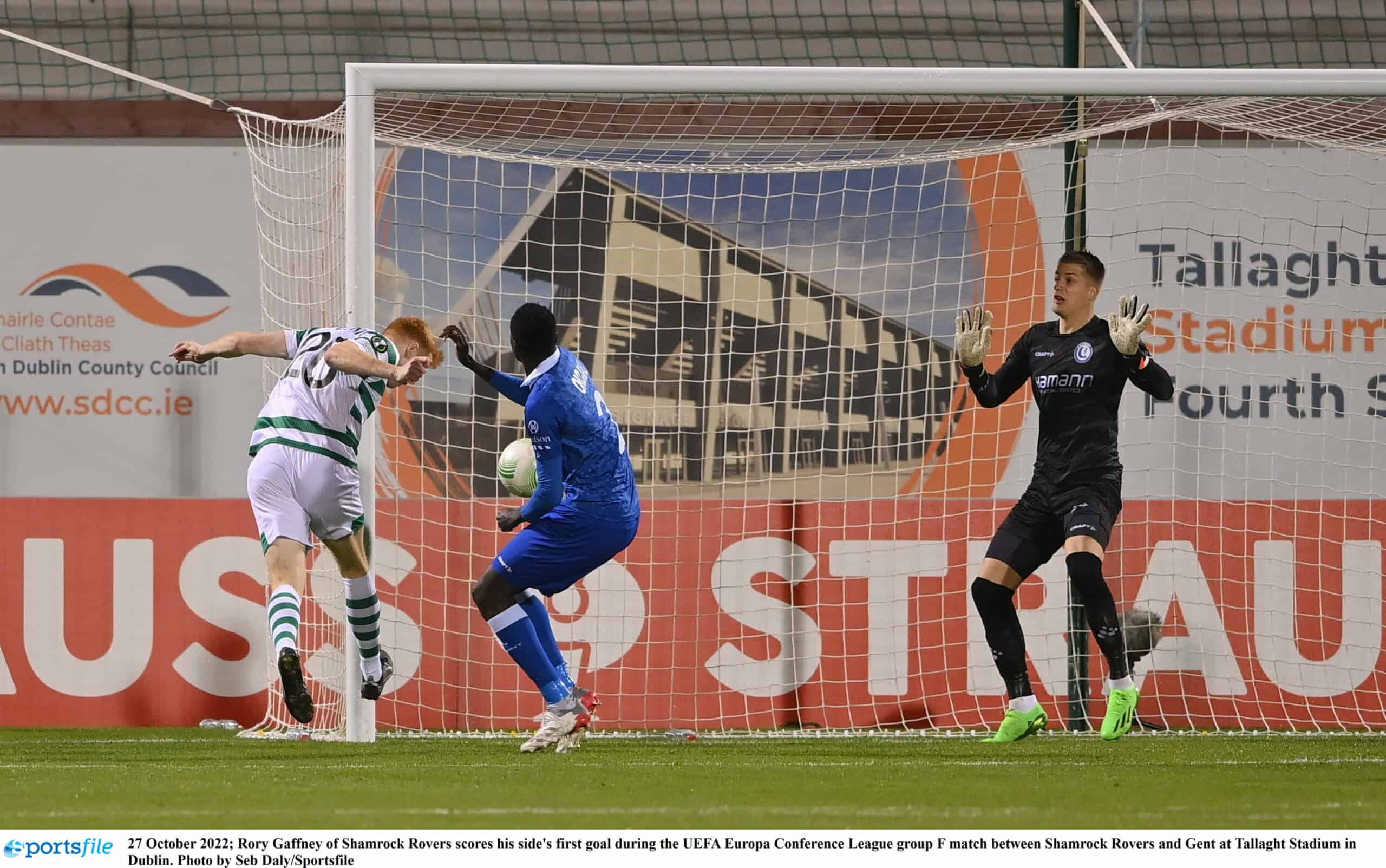 Shamrock Rovers played out an entertaining 1-1 draw with top seeds in Group F, KAA Gent, at Tallaght Stadium on Matchday 5 in the UEFA Europa Conference League. An early strike from Rory Gaffney was cancelled out by substitute Hyunseok Hong in front of a crowd of 6,203 in D24.

It was a dream start for the Hoops who took the lead after just three minutes. A free-flowing move from back to front concluded with Richie Towell providing a pinpoint cross to the back post to Rory Gaffney who headed home past Gent goalkeeper Paul Nardi from close range to send the Rovers faithful into a frenzy.

Gent looked to find a way through the Rovers defence but the back line remained compact and secure. It was Gaffney again causing the away side problems when he nearly doubled the Hoops lead after his half-volley from distance had to be touched onto the post by Nardi. The Belgians had a chance through former Huddersfield Town forward Laurent Depoitre, but his close-range strike was well saved by Alan Mannus.

The game plan was working with the Hoops well on top in the first half. That game plan was disrupted however when Stephen Bradley was forced into making two changes in the midfield with both Dylan Watts & Chris McCann picking up knocks which meant they could play no further part in the game. Justin Ferizaj & Lee Grace replaced the pair which saw a reshuffle with Sean Hoare moving from the back three into the centre of the park.

Gent applied some pressure on the Rovers goal before half time but Rovers remained resolute and went in at the break one goal to the good.

The Hoops remained strong in defence during the second period and Gaffney remained a threat up top, causing the Gent defenders major problems with his direct and pacy play. And it was Gaffney who had the ball in the net for a second time but unfortunately, the linesman’s flag was raised for offside.

The game was turned on its head with 15 minutes to go when Rovers were reduced to ten men with Justin Ferizaj receiving a second yellow card from Austrian referee Julian Weinberger. No more than 60 seconds later Gent were level. With the Hoops still adapting to a change in shape, substitute Hyunseok Hong was left unmarked in the box and fired home a cutback from Bruno Godeau to bring the teams level to set up a grandstand finish.

Rovers remained strong and compact in the closing stages to secure a hard-fought point, but when the dust settles may wonder could and should they have more for their efforts.

Up next for the Hoops is a return to SSE Airtricity League action as we host Derry City at a sold-out Tallaght Stadium on Sunday evening in the penultimate game of our domestic campaign. The Hoops will be presented with a record 20th League Title and our third title in a row after full-time.