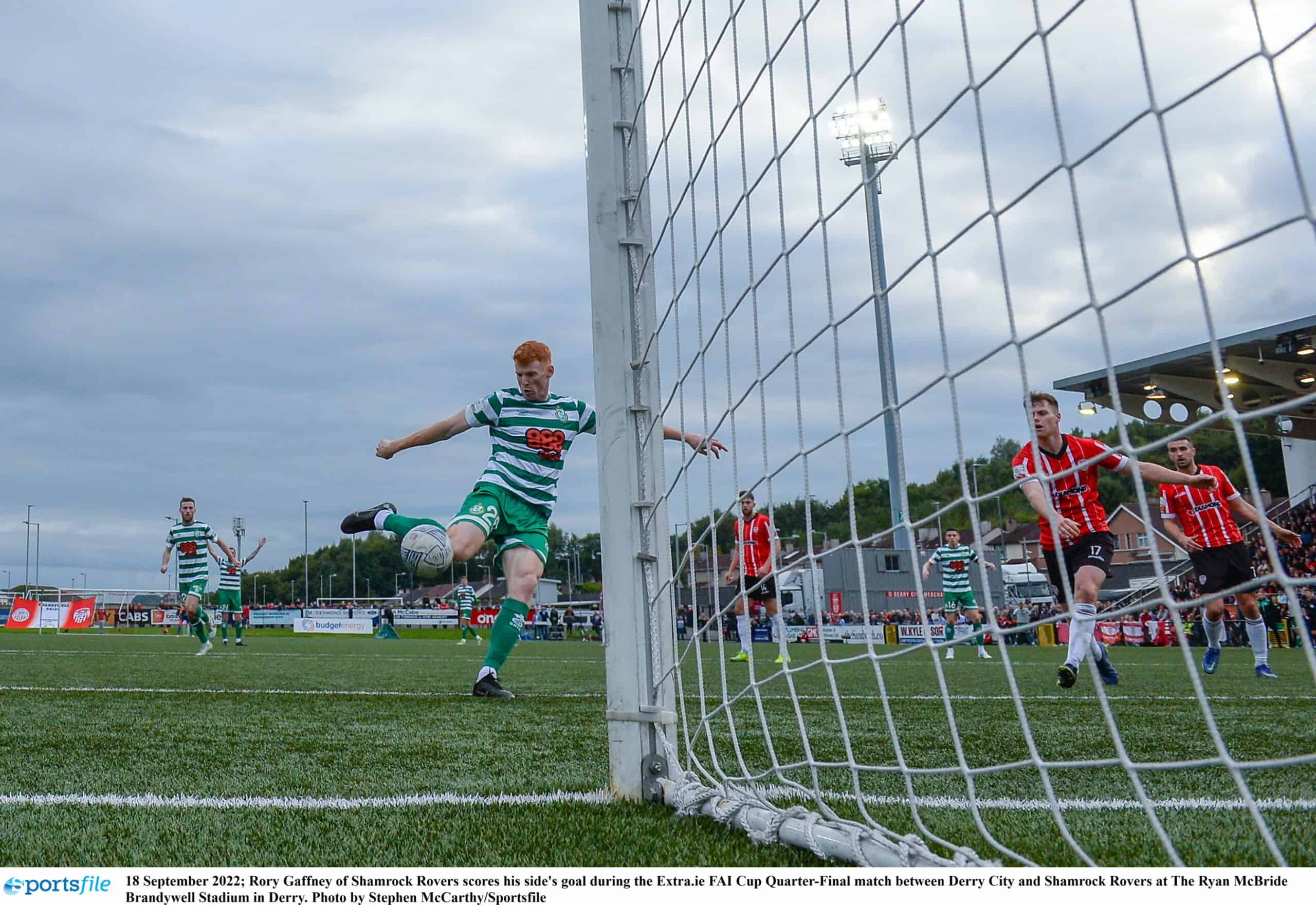 Shamrock Rovers journey in the Extra.ie FAI Cup came to a close on Sunday evening after suffering a 3-1 defeat to Derry City at The Ryan McBride Brandywell Stadium.

The Hoops made 4 changes from the team that took to the field in Ghent with Sean Kavanagh, Neil Farrugia, Aaron Greene and Leon Pohls all coming into the side in place of Gary O’Neill, Ronan Finn, Dylan Watts & Alan Mannus.

In what was a thrilling cup tie, Rovers, despite being forced to play the majority of the game with 10 men, showed great character to remain in the game and take the tie into extra-time. The Hoops’ midweek European exploits may have caught up with them in the additional period of play as the home side simply had more legs.

As expected, Derry came flying out of the traps in search of an early goal. The first big chance of the game came at the five-minute mark when Will Patching’s free-kick found Cameron Dummigan in space at the back post but the defender’s shot was well kept out by Leon Pohls in the Rovers goal.

The Hoops struggled to get a foothold in the game in the opening exchanges, with the home sides’ pressure paying off as they opened the scoring on 19 minutes. Cameron McJannet’s switch of play found Mark Connolly in the box and his dinked cross fell to Jamie McGonigle who made no mistake heading home from five yards out to give the hosts the lead. The Candystripes nearly doubled their lead just two minutes later as Dummigan’s long-range effort crashed off the crossbar, a let-off for Rovers who were desperately trying to find a way back into the game.

That task became even harder before halftime when referee Rob Hennessy adjudged Lee Grace to have fouled Patrick McEleney in the box, with the Clare official pointing to the spot and showing the Rovers skipper for the day a straight red card. On further viewing, it appeared to be a harsh call, and justice may have been served as Will Patching’s penalty smacked back off the crossbar as the score remained 1-0 going in at the break.

The Hoops adjusted their shape at the break, now operating a flat back four, in an attempt to remain compact and difficult for Derry to break down. That switch had the desired effect, as Derry struggled to test Leon Pohls despite controlling the majority of the ball.

Stephen Bradley’s men remained patient and solid and their patience paid off with 25 minutes to go. A spectacular solo run from Neil Farrugia saw him fly past two Derry defenders before cutting the ball back to Andy Lyons whose strike was saved by Maher, but Gaffney positioned himself well to fire home the rebound into the empty goal to bring the cup tie level again. Rovers remained compact for the remainder of the second half, limiting Derry to few opportunities as the game headed for extra time.

With Derry making fresh changes in the second half, energy and freshness were on their side and it paid off just six minutes into the first period of extra time. Michael Duffy’s deep corner found the head of substitute Daniel Lafferty and the former Rovers man made no mistake as he headed past Pohls into the back of the net to give the home side a 2-1 lead going into the break.

With Rovers needing a goal, more bodies were pushed forward and unfortunately for the Hoops, the home side took advantage of this with 10 minutes left of the game. Two more Derry substitutes combined as James Akintunde found Brandon Kavanagh who cut in from the left and finished coolly past Pohls to make it 3-1 and seal the victory for the Candystripes.

Despite showing resilience and character to get back into the game with 10 men, it wasn’t to be for the Hoops as our 2022 Cup campaign came to an end at the Quarter-Final stage.

Focus now turns to Shelbourne at Tolka Park on Thursday as we look to extend our lead at the top of the SSE Airtricity League table.