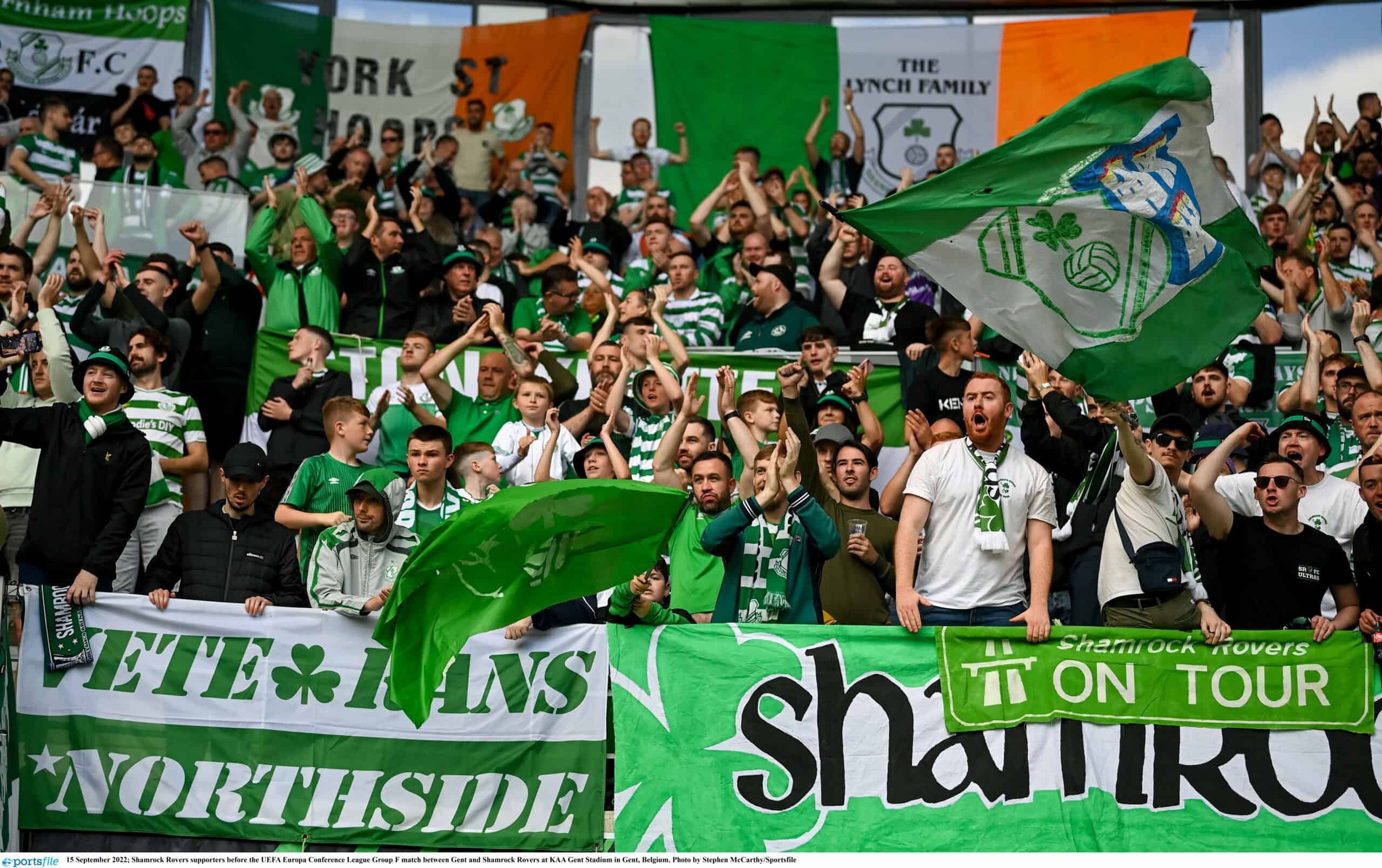 Shamrock Rovers experienced a tough night in Belgium going down 3-0 to KAA Gent on Matchday 2 in Group F.

The Hoops, who were making their 100th appearance in European competition, found it difficult in the opening exchanges to get a foot on the ball, with Gent pressing high up the pitch. Gent were enjoying the majority of the play in the Hoops half and that early pressure would pay off after just 9 minutes.

Hyunseok Hong clipped a ball between Dan Cleary and Lee Grace in the Rovers defence, where Malick Fofana was waiting to direct the ball into the path of teammate Hugo Cuypers who took a touch before firing across Mannus into the corner of the net to give the home side the lead.

Gent were gifted a second just 10 minutes later when an unfortunate slip by Dan Cleary presented Cuypers with an opening at goal. Cleary, while laying horizontal, did exceptionally well to manoeuvre into a position to block the Belgian’s effort. Still, the rebound fell to captain Vadis Odjidja-Ofoe who applied the finish with a scissor kick from the edge of the area.

The Hoops were up against it now and were desperately seeking a goal that would bring them back into the game before halftime. The best chance to do so came through a smart corner routine which ended with a threatening cross towards the back post from Dylan Watts, but goalscorer Hugo Cuypers proved he was just effective at the other end, with a vital headed clearance as Cleary waited to head home

Stephen Bradley made one change at the break with Sean Kavanagh coming on for Chris McCann in the middle of the park and it was the Hoops who started the half the brighter. Dylan Watts and Gary O’Neill both had shots on goal before a rasping volley from Rory Gaffney forced Nardi to turn the ball behind for a corner.

Gaffney was finding space in behind the home side’s defence and teed up Jack Byrne whose first-time whipped effort was inches away from reducing the deficit. It was an encouraging spell for the Hoops who were enjoying their best period of the game. That is why when Gent added a third against the run of play, it was a gut punch for the Hoops with 25 minutes to play.

Malick Fofana teed up Odjidja-Ofoe at the edge of the box whose right foot strike found the top corner, giving Mannus no chance, for the Gent captain’s second of the game.

Rovers had opportunities in the closing stages to grab a goal that their play deserved, but Rory Gaffney and Justin Ferizaj couldn’t get the better of Nardi in the Gent goal who kept his clean sheet intact.

It was another tough evening for the Hoops away in Europe and a steep learning curve. Gent were clinical and without creating a hat-full of chances, took their opportunities when they presented themselves. Similarities perhaps between the Hoops display against Harps just 4 days previously. The experience will no doubt stand to Bradley’s men and with four more games to come in Group F, the Hoops will take confidence from their second half showing that there are more points to be earned in this campaign.

Approximately 1,000 members of the Green and White Army made the trip to Belgium and they provided incredible noise, support & colour pre-match and throughout the 90 minutes. We’ve said this on numerous occasions before, our supporters, our 12th man, are unrivalled, they are with us everywhere we go and we, as a Club, are very proud of not only the performance on the pitch in Gent but the performance off the pitch as well.