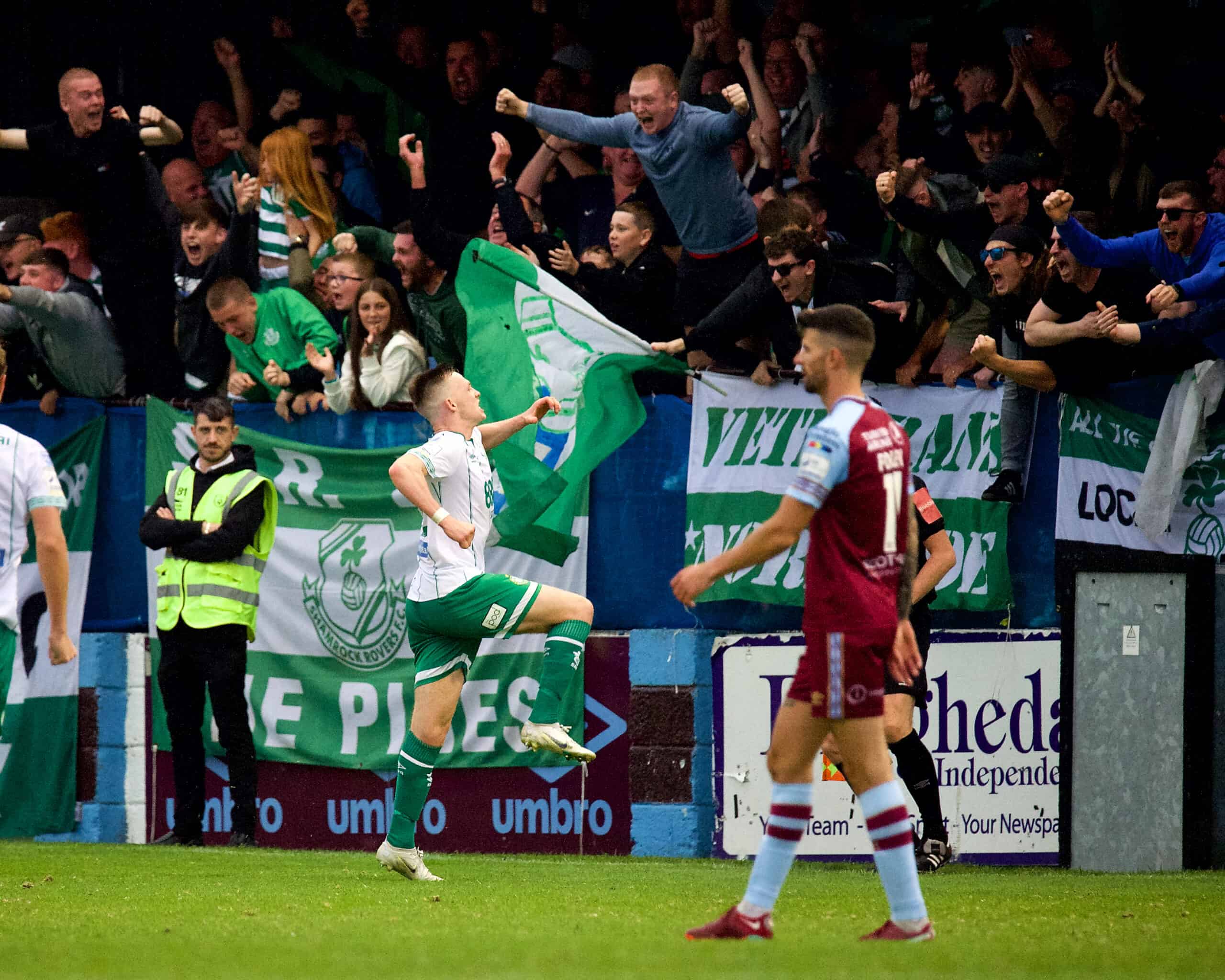 Shamrock Rovers progressed to the Quarter Final of the Extra.ie FAI Cup after a hard-fought 2-1 victory over Drogheda United after extra time. Goals from Sean Gannon and Andy Lyons were the difference in what was a very competitive battle at Head In The Game Park.

Stephen Bradley made seven changes to the Rovers starting XI after the midweek victory against Ferencváros in Europe, with Leon Pohls, Dan Cleary, Andy Lyons, Dylan Watts, Rory Gaffney, Jack Byrne and Aaron Greene all coming into the team.

It was a dream start to the game for the Hoops as it took just four minutes to find the net. A beautiful, lofted pass from Byrne glided over the Drogheda defence and fell right to Gaffney who had his initial shot well saved by Colin McCabe, but the Galwegian did brilliantly to redirect the rebound back across goal where Sean Gannon was waiting to fire home to give his team an early lead.

The Hoops only grew in confidence, keeping possession well as they continued to look for gaps to exploit in the Drogheda back line. Aaron Greene and Gaffney both had chances to double Rovers’ lead, but neither could find the back of the net. United woke up after these threats and for the final 15 minutes of the first period, they put the Rovers defence under some pressure but failed to create any clear-cut opportunities to trouble Leon Pohls in the Hoops goal before the whistle for half-time.

Drogheda came out strong in the second half and got their equaliser in the 59th minute. A Drogheda corner was only half cleared, with the ball eventually finding Dylan Grimes whose low cross across the six yard box located Dean Williams who finished past Pohls to make it 1-1. Both teams struggled to create many clear-cut chances for the final 30 minutes of normal time, with Dylan Watts and Gaffney having the away side’s best opportunities of the second period. With neither side capitalising, the game went to extra time.

Rovers had to dig deep. The substitutions of Aidomo Emakhu, Richie Towell, Sean Kavanagh, Neil Farrugia and Justin Ferizaj all gave the Hoops a refreshing burst of energy during the period of extra time.

It looked like we were heading for a penalty shootout, but Rovers finally found a winner with ten minutes remaining. Ferizaj picked up the ball from deep and played the perfect pass forward towards Lyons, whose first touch took him inside the defender onto his right foot before curling past the sprawling McCabe into the bottom corner to send the travelling fans into raptures. Both Emakhu and Towell had opportunities to add a third late on, but both efforts just missed the target.

Neil Doyle brought the game to a close to the delight of the travelling Hoops support. It was a hard-fought victory for Rovers, but Stephen Bradley’s side showed their experience and determination, digging deep in extra time and finding a valuable winning goal to book our place in Tuesday’s Quarter Final draw.

Up next for the Hoops is the Dublin Derby at Dalymount Park on Friday night.