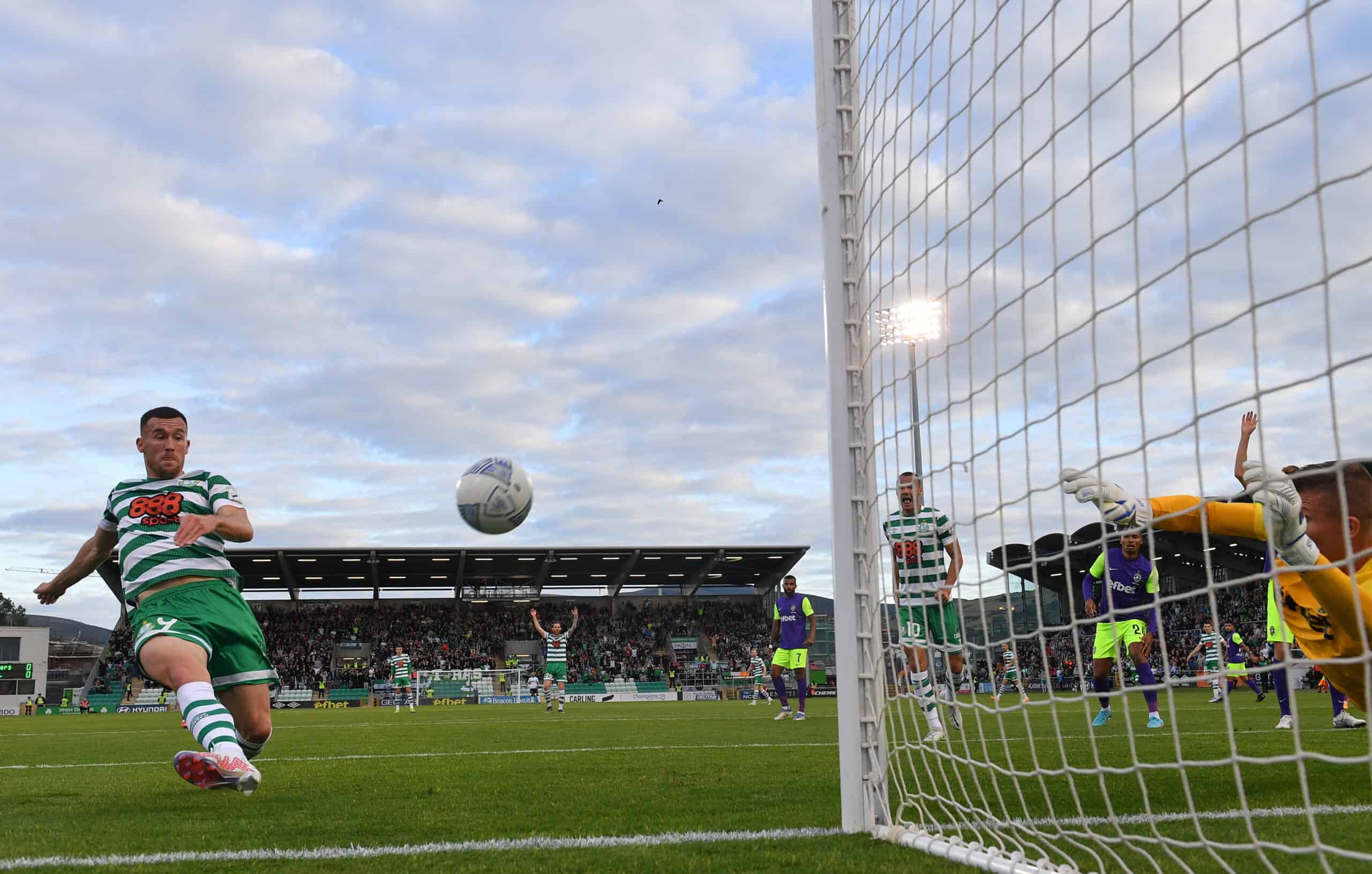 Those who were in attendance however were treated to one of the great Rovers performances on the night as the Hoops defeated Ludogorets 2-1, falling just short of progressing overall in the tie.

Backed by a large, vocal home support, it was Rovers who started the game on the front foot, playing confident, possession-based football in an attempt to break the deadlock. Richie Towell came agonizingly close in the 8th minute when he latched onto the end of a sublime low cross by Ronan Finn but outstretched, couldn’t direct his effort to the right side of the post.

The Hoops continued to push and took a deserved lead at the 20 minute mark. Andy Lyons created space on the left wing and whipped in a brilliant right-footed cross which fell to Graham Burke whose header was acrobatically saved by Ludogorets goalkeeper Sergio Padt but Aaron Greene was quickest to react to the rebound, firing home to give Rovers the lead on the night.

The home fans were energised and were starting to believe. The decibel level in the stadium went up a notch as Bradley’s men nearly doubled their lead fifteen minutes later. More great play on the left wing from Lyons resulted in his cross falling to Towell on the edge of the box, but his snap shot just went wide of the goal. Rovers went in at the break with a spring in their step, encouraged by their first half showing in a half that they largely controlled.

Ludogorets manager Ante Šimundža made a double substitution at halftime in a further sign that he was unhappy with how the game was playing out. The Hoops received a boost five minutes into the second half as Show was shown a second yellow card after a poorly-timed tackle in the middle of the pitch, and Ludogorets were reduced to ten men.

Rovers controlled the second half but struggled to break down a stacked Ludogorets rear guard who set out to maintain their defensive shape and hit Rovers on the counter. Rovers emptied the bench in an attempt to apply further pressure, with Rory Gaffney, Aidomo Emakhu and Neil Farrugia all being introduced. Rovers had Alan Mannus to thank for making a series of smart saves to deny Ludogorets a goal on the counterattack as the Hoops committed bodies forward in search of more goals.

As the game entered the final stages, Rovers scored again. A brilliant piece of combination play on the right dazzled the Ludogorets defence, with the ball eventually falling to substitute Emakhu who fired home to set up a grandstand finish.

Those who weren’t on the edge of their seat were on their feet as the fourth official indicated there was to be a minimum of five additional minutes to be played. Many felt this was on the low side due to the several instances of time-wasting by the Ludogorets players in the second half. It was a compliment to Rovers that the Bulgarian league champions, seasoned group stage participants in Europe, resorted to such tactics to see out a game they came into with a three goal lead.

A Rovers pushed for a goal that would take the tie to extra time, Ludogorets struck a sucker punch on the counter, with Cauly Souza beating Mannus with a powerful shot into the top corner. Celebrations from the Ludogorets bench and backroom team told their own story. They got an almighty scare.

It’s a tough one to take for Rovers, who will wonder what might have been after an incredible performance and effort on the night. The Hoops will carry the momentum from Tuesday night’s win into next week’s tie with KF Shkupi, who they now meet in the UEFA Europa League 3rd Qualifying Round. The first leg is set to take place in Tallaght next Thursday 4th August before the return leg in Skopje on Tuesday 9th August.

Immediate attention however turns to the FAI Cup as the Hoops take on Bangor Celtic in the 1st Round on Friday evening in Tallaght.