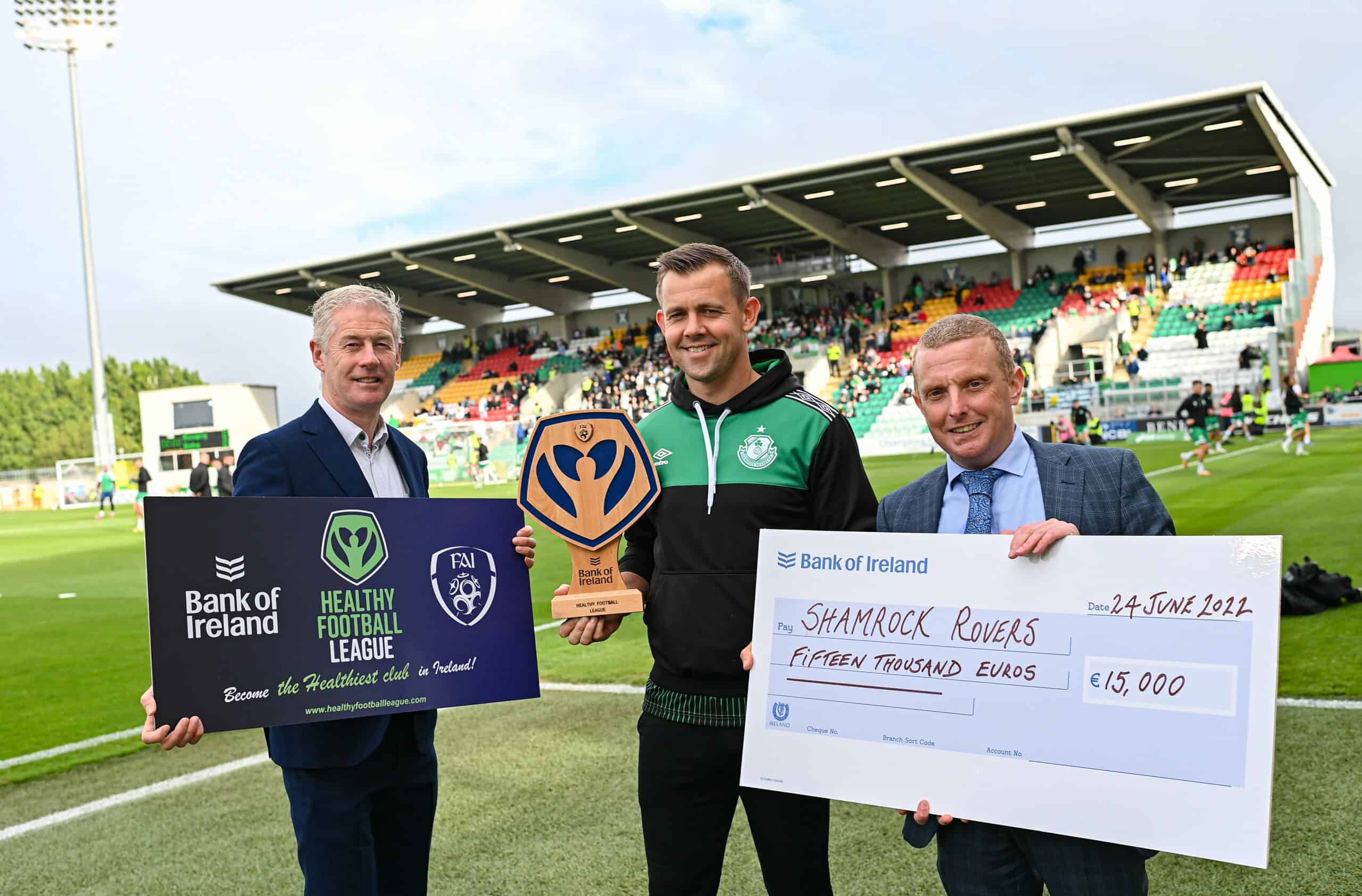 Shamrock Rovers fans have secured the first Bank of Ireland Healthy Football League title and recognition as the League of Ireland’s fittest fans!

For the past three months, Shamrock Rovers staff have been busy behind the scenes encouraging their affiliate grassroots clubs and their wider community of fans to get active and improve their health and well-being. This approach has worked extremely well as Rovers quickly gathered the largest group of Healthy Football League participants and comfortably cruised to the winning line and the Bank of Ireland sponsored prize.

“The Healthy Football League provided a great opportunity to engage our network of grassroots affiliated clubs in a fun health and well-being programme where they could also involve their wider network of friends and family. We are delighted at how this has worked having accumulated the largest group of participants in the country and consequently, we are now very happy that our fans and friends are the Healthy Football League Champions”.

Mark Lynch, Board Director and Head of Communications at Shamrock Rovers

As a supporter of the League of Ireland, Bank of Ireland was instrumental in encouraging League of Ireland clubs to engage their fans in this unique initiative designed to get communities active. Almost 4,000 fans represented their local clubs amassing thousands of miles of healthy movement and exercise which translated as competition points for their clubs. It also provided an opportunity for grassroots clubs to partner with local League of Ireland clubs for the competition and this worked out particularly well for Wexford-based club, Campile United who excelled in their own right by winning the overall grassroots club prize.

The Bank of Ireland Healthy Football League is an online, app-based, competition that encourages fans of League of Ireland football clubs to exercise and to gain the benefits of maintaining a healthy lifestyle. The idea behind the Healthy Football League app is to use the inherent rivalry between Irish football fans to motivate them and their friends and families to get physically active.

The initiative encouraged every member of the community to score points for their favourite club by using the app while walking, cycling, or running.

“This was the first Healthy Football League in Europe with every National League club represented. People have made huge efforts around the League of Ireland and local grassroots club communities to support their local clubs while at the same time enjoying the benefits of a more active lifestyle. Huge credit must go to Bank of Ireland for their support in enabling League of Ireland clubs to forge closer links in local communities and facilitating an opportunity for thousands of people to get more active. Congratulations to Shamrock Rovers fans on becoming the first Healthy Football League winners and huge credit must also go to all the other clubs who encouraged their fans, friends and families to embrace a healthier lifestyle.”

Derek O’Neill of the FAI’s League of Ireland department

“It was great to see thousands of people getting out and active over the past three months in support of their local football clubs. Hopefully, they’ll keep those new healthy habits going throughout the summer and beyond. Bank of Ireland was delighted to be involved in such a positive initiative which impacted on the health and well-being of communities all over Ireland.”

While this season’s competition has concluded, anyone can still download the app free of charge to track their own fitness progress. Simply download and sign up to your favourite club! For more information on how the Healthy Football League works, see www.healthyfootballleague.com