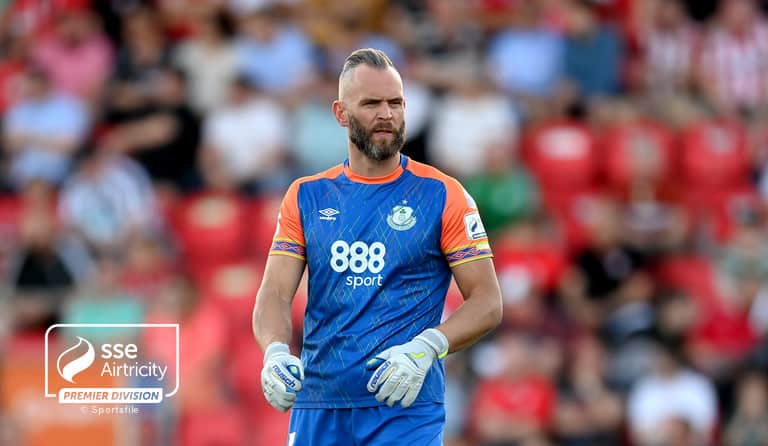 Earlier this week, the club confirmed that goalkeeper Alan Mannus was extending his contract at Rovers for at least one more season in 2023. We spoke with Alan, and he explained his decision to continue playing, something that pleased all Hoops’ fans.

“Last year, when I was talking about playing in 2022, I said to the manager that this season would be my last. I was 99% sure it would be but I left a small percentage open.

I had niggly injuries with my knee and my back last year and I had injections in both to get me through the season. It was bothering me to the point that when I was at home with my kids and I was avoiding doing certain things when I was playing with them. It was getting to the point when I was saying to myself I can’t keep doing this when it is getting in the way of me playing with my kids. So I said ‘ok one more year but I can’t keep doing this.

At the end of last season, we had a good bit of a break with the way the league is structured with a couple of months off before pre-season. It was so helpful to get a bit of rest and not having to dive around. I was able to do a couple of weeks before pre-season to get my body ready for playing again. The combination of those things allowed me to feel better.

At the start of the season I felt good. I spoke to my wife and said I think I can play on another year. She said she thought it would be good as she could see I was enjoying it. I spoke to the manager and said I was reconsidering and if he wanted me to stay on. We spoke about it and he was happy for me to do it and we got it sorted. I’m delighted that the manager has faith in me to still want me to be at the club.

I felt if I did retire at the end of this year, I might regret it. When you retire that is it, you are done and so it is a big thing. I feel I still have the motivation and that is the most important thing. I’m motivated to play and to succeed.”