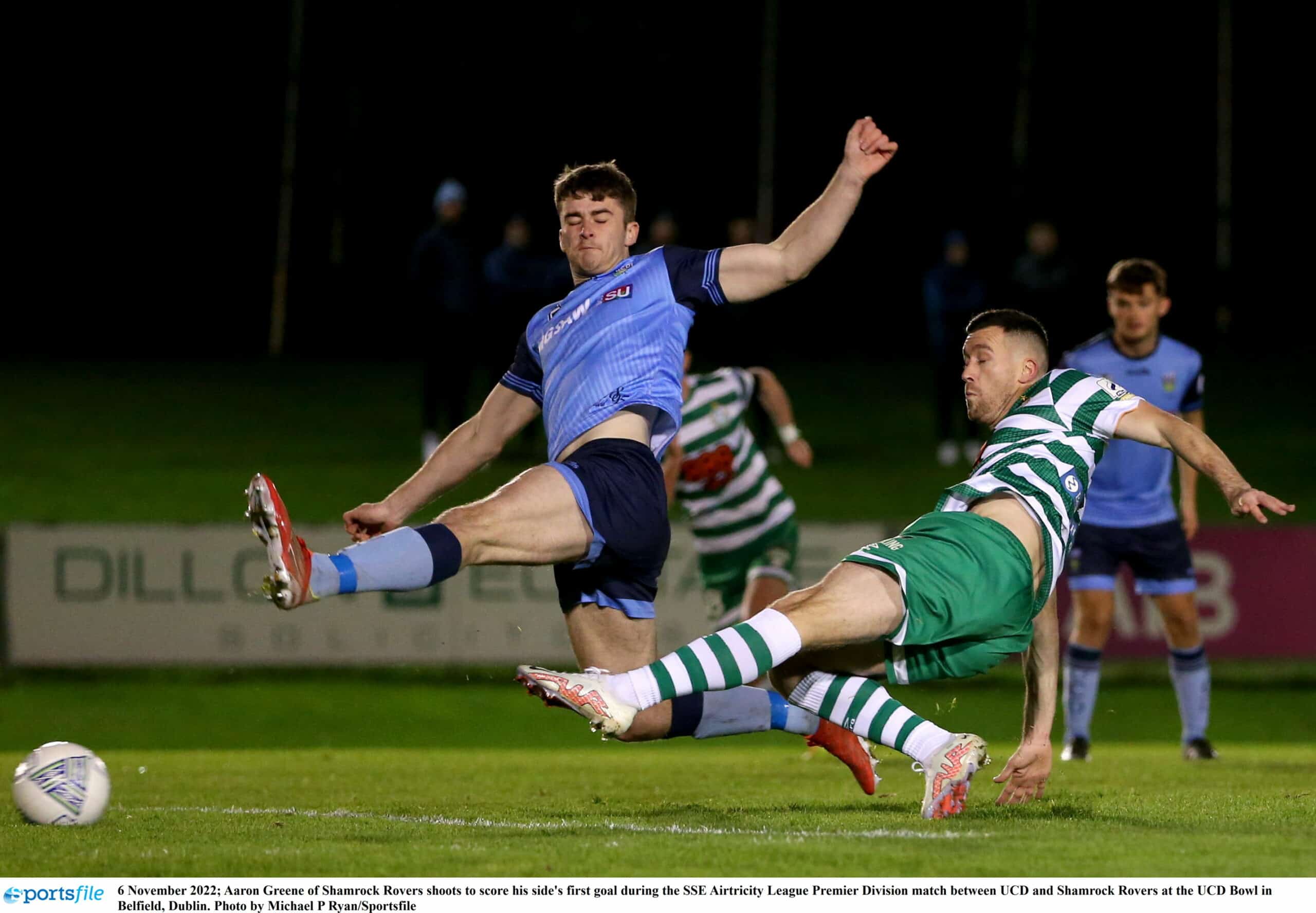 Shamrock Rovers concluded their 2022 campaign in style with a 2-0 victory over UCD at the UCD Bowl on Sunday evening. Goals in each half from Aaron Greene and Simon Power were enough to seal the points which meant the Hoops set a new club record by accumulating 79 points across the 36-game season, beating the previous record of 78 points which was set by the class of 2021.

Stephen Bradley opted to make a few changes to the side that lifted the title against Derry City the previous week as Sean Hoare partnered Ukrainian Viktor Serdeniuk in central midfield, while Leon Pohls and 17-year-old Justin Ferizaj also came into the starting 11.

Rovers were given a guard of honour as they entered the pitch as the away fans, like they have done all season, made their voices heard. It was the Hoops who started the game on the front foot and after some early pressure, we would take the lead after just six minutes. When UCD failed to adequately clear the ball, Justin Ferizaj rose highest to cushion a header into the path of Aaron Greene who swiveled before firing past Moore to put the Hoops ahead.

The league champions would continue to show their quality throughout the first half. Greene nearly doubled our advantage but was denied by Kian Moore. Ferizaj was one of the stand-out players for Rovers in the first half. The 17-year-old looked comfortable and confident in possession as he looked to constantly create chances and find openings for his teammates. The Hoops remained in control for the first period, dominating possession and looking threatening on the attack but as referee Derek Tomney blew for half-time it remained 1-0.

After the break Rovers continued to show their quality and confidence as they nearly doubled their lead when Greene’s attempt struck the post after some nice build-up play involving Ferizaj and Rory Gaffney. Throughout the second half, Bradley introduced Aidomo Emakhu, Gideon Tetteh, Simon Power, and Neil Farrugia in an attempt to add extra energy to the side as Rovers searched for that second goal. Andy Lyons was also introduced with 15 minutes to go in what was his final Rovers appearance ahead of his move to Blackpool in January. The away support made sure to show their appreciation to Andy, who made a huge impact on the pitch and a huge impression off it during his time at the Club.

The Hoops got their well-earned second goal in the 83rd minute when a Sean Kavanagh corner fell to Power on the edge of the box and the 24-year-old made no mistake with his strike as it deflected past substitute goalkeeper Lorcan Healy and into the back of the UCD goal for his first goal for the Club.

The result closed the curtain on what was one of the most memorable, successful, and entertaining seasons in our history. Records were broken and memories were made throughout the league and European campaigns. The club thanks our fans, our 12th man, for their amazing support both at home and away this season. Wherever we go, they’ve been there in their numbers and the role they play is vital in driving us on.

Stephen Bradley and his men have worked relentlessly to achieve success and they can’t wait to go again next season as we pursue further silverware, new records and more history.