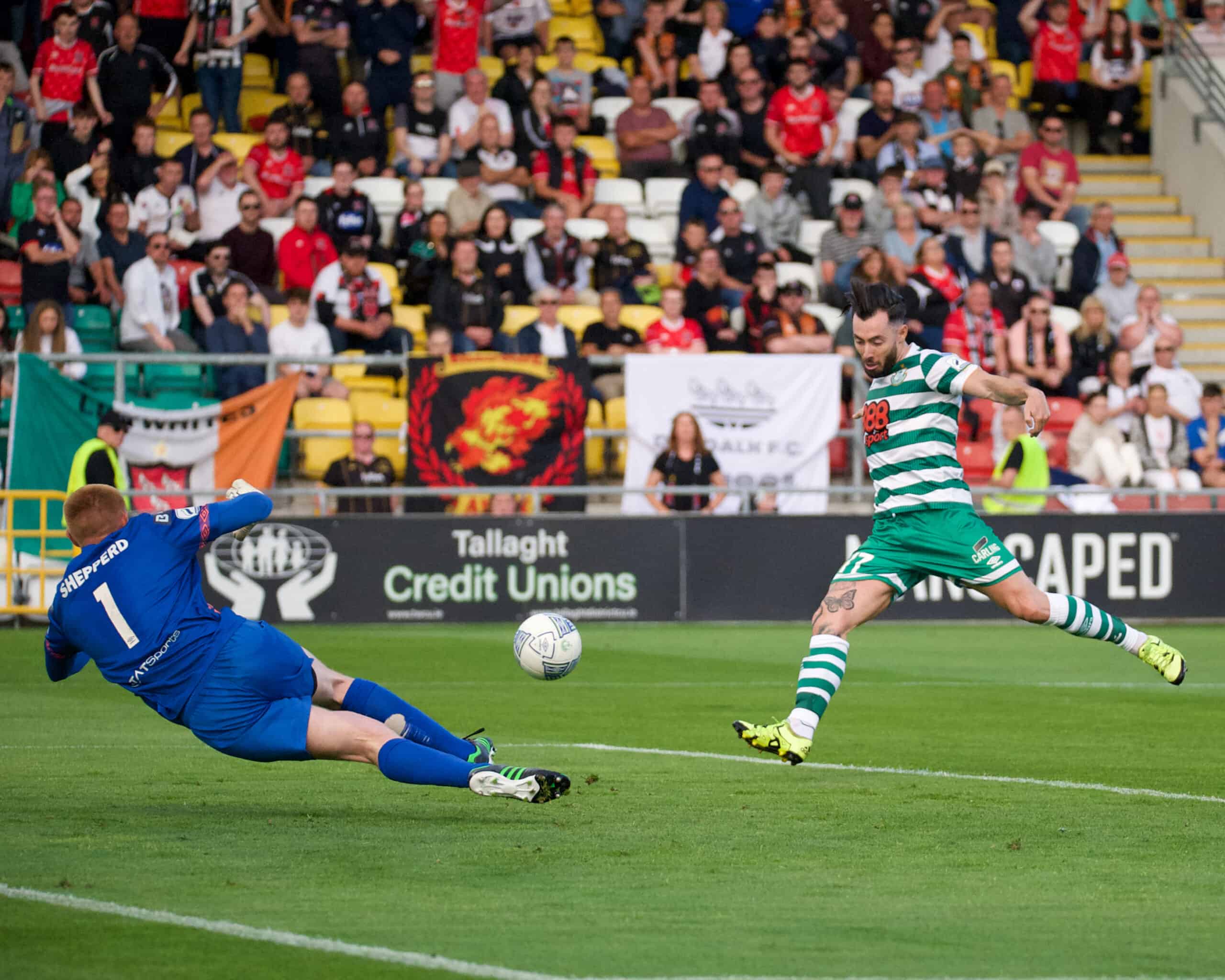 Shamrock Rovers regained a seven-point lead at the top of the SSE Airtricity League on Sunday night with an emphatic 3-0 victory over second-place Dundalk at Tallaght Stadium. Clinical strikes from Aaron Greene, Richie Towell and Rory Gaffney ensured all three points would go to the Hoops, who put in a polished performance in front of a crowd of 5,525

Nine of the starting XI from the Hoops midweek trip to Hungary started the game, with Richie Towell and Ronan Finn both coming into the side to add experience and energy to the team.

It was an even opening 10 minutes, with both sides creating chances. Ronan Finn had the first opportunity for the home side just 30 seconds into the game but could not find the back of the net, blazing over from inside the box. The visitors had a chance of their own through John Martin who came close with a header but failed to hit the target. It did not take long for the first goal to come though as Stephen Bradley’s side broke the deadlock after just 13 minutes with a rapid counterattack.

Daniel Cleary regained possession for Rovers during a Dundalk attack and played the ball to Rory Gaffney who went on a brilliant run, showing blistering pace before squaring to Aaron Greene who brought the ball under his control before slotting past Shepperd to give Rovers a valuable early lead. The Hoops remained on top and continued to threaten as they searched for a second goal, with Gaffney coming close on two occasions but failing to beat Nathan Shepperd in the Dundalk goal.

Rovers persistence eventually paid off as we doubled our lead 10 minutes before half-time. Martin had found the back of the net for the Lilywhites but the goal was disallowed due to a foul on Cleary. From the resulting free-kick, Cleary picked out Greene in space who rolled the ball across to Richie Towell to tap in and make it 2-0 to Bradley’s men going in at the break.

Dundalk improved in the second period and had chances to pull a goal back through a Steven Bradley shot that went just wide as well as a Keith Ward free-kick which Alan Mannus brilliantly saved. That save would prove pivotal as just a matter of minutes later, Rovers would make it 3-0 and seal the victory. It was yet another devastating counterattack with Greene getting his second assist of the game as he squared the ball to Gaffney who finished with ease to wrap up the three points for the Hoops.

The Lilywhites continued to try and find a consolation goal, but the ever-impressive Mannus continued to deny the likes of Joe Adams, David McMillan and Robbie Benson from finding the back of the net for the away side, as a clean sheet was preserved.