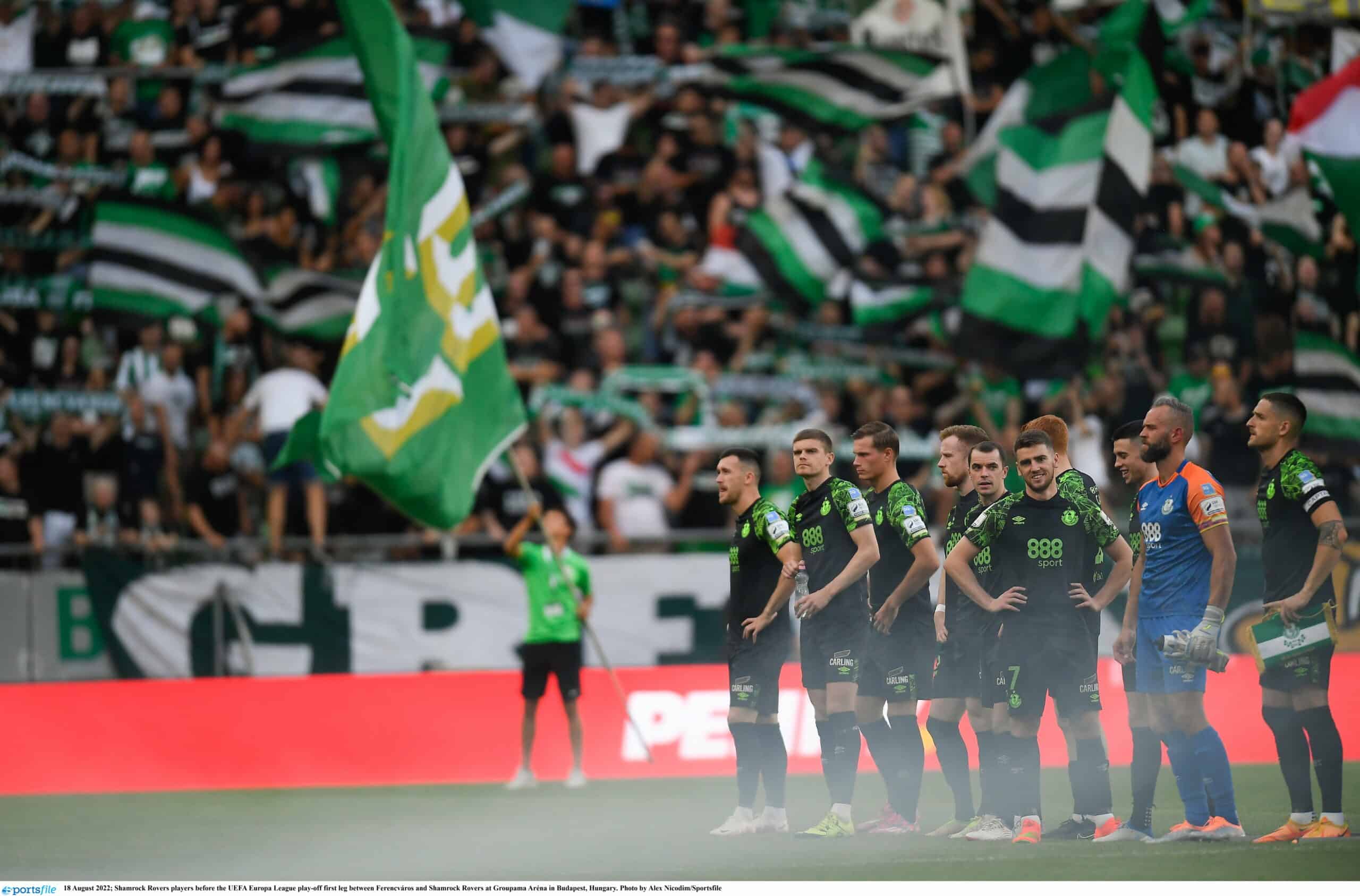 Shamrock Rovers suffered a 4-0 defeat to Hungarian Champions Ferencváros in the first leg of our UEFA Europa League play-off tie. The home side’s attacking quality proved a tough task for the Hoops to deal with in scorching conditions as goals from Carlos Auzqui, Eldar Civic and a brace from Adama Traore handed Ferencváros a major advantage ahead of the second leg in Tallaght next week.

Stephen Bradley made two changes to the side that drew 0-0 with Derry City last weekend, with Aaron Greene and Dan Cleary both coming into the side to add fresh legs. Rovers were without 6 first team players due to illness, injury & suspension with Roberto Lopes, Ronan Finn, Chris McCann, Graham Burke, Simon Power & Aidomo Emakhu all unavailable.

Ferencváros started the game strong, keeping possession well as they attempted to break down the Rovers defence. Moroccan striker Ryan Mmaee came close to opening the scoring just seven minutes in when his curling strike from the edge of the box hit the post. The home side’s persistence paid off as they found the net after 13 minutes.

A short corner caught out the Hoops defence and a deflected cross ended up at the feet of Carlos Auzqui who finished from close range past Alan Mannus to give Ferencváros an early lead. Stephen Bradley’s men responded well to falling behind as they began to gain more control in the game, keeping possession well and trying to find gaps in behind the home side’s defence. Mmaee continued to be a threat to the Hoops and he hit the post for a second time in the 33rd minute after shimmying through the compact Rovers defence and getting a powerful strike away.

It was a let-off, but just a minute later Ferencváros doubled their lead. Mmaee was once again involved as he found himself in behind the Rovers back line, with his low pass across the face of goal finding Adama Traore who made no mistake putting the ball into an empty net from six yards out. The Hoops defence was under constant pressure but remained resolute for the remainder of the first half as the Hungarian Champions went in two goals to good.

It was a disastrous start to the second half for Bradley’s side as Ferencváros made it 3-0 just two minutes after the break. A rapid counterattack from the home side led to Mmaee having his attempt saved by Mannus but the Hoops failed to clear their lines and Traore capitalised to score his second goal of the evening with a simple finish.

It was a hammer blow for the Hoops at the start of the second period. Fresh legs were introduced in the form of Jack Byrne, Neil Farrugia and Richie Towell in an attempt to control the tempo of the game. The substitutions brought more energy and calmness to Rovers’ game, but Rovers were just lacking the cutting edge in the final third. Ferencváros continued to threaten on the counterattack but Rovers did well to keep the scoreline at 3-0 through a combination of solid defending and good goalkeeping from Mannus.

As the game entered the final minutes of injury time, the home side added a fourth goal, with substitute Eldar Civic scoring from the edge of the box after a smart corner kick routine to add salt into Rovers’ wounds.

It was a difficult night in tough conditions in Budapest, but the Hoops will have learned a lot from the experience of coming up against quality opposition. It’s a quick turnaround for Rovers as attention turns to Sunday and a massive top of the table clash with Dundalk, presenting the perfect opportunity to bounce back in front of a huge home support at Tallaght Stadium.

Subs not used: A Bogdan, S Mergl, A Kovacevic, A Esiti; K Lisztes.