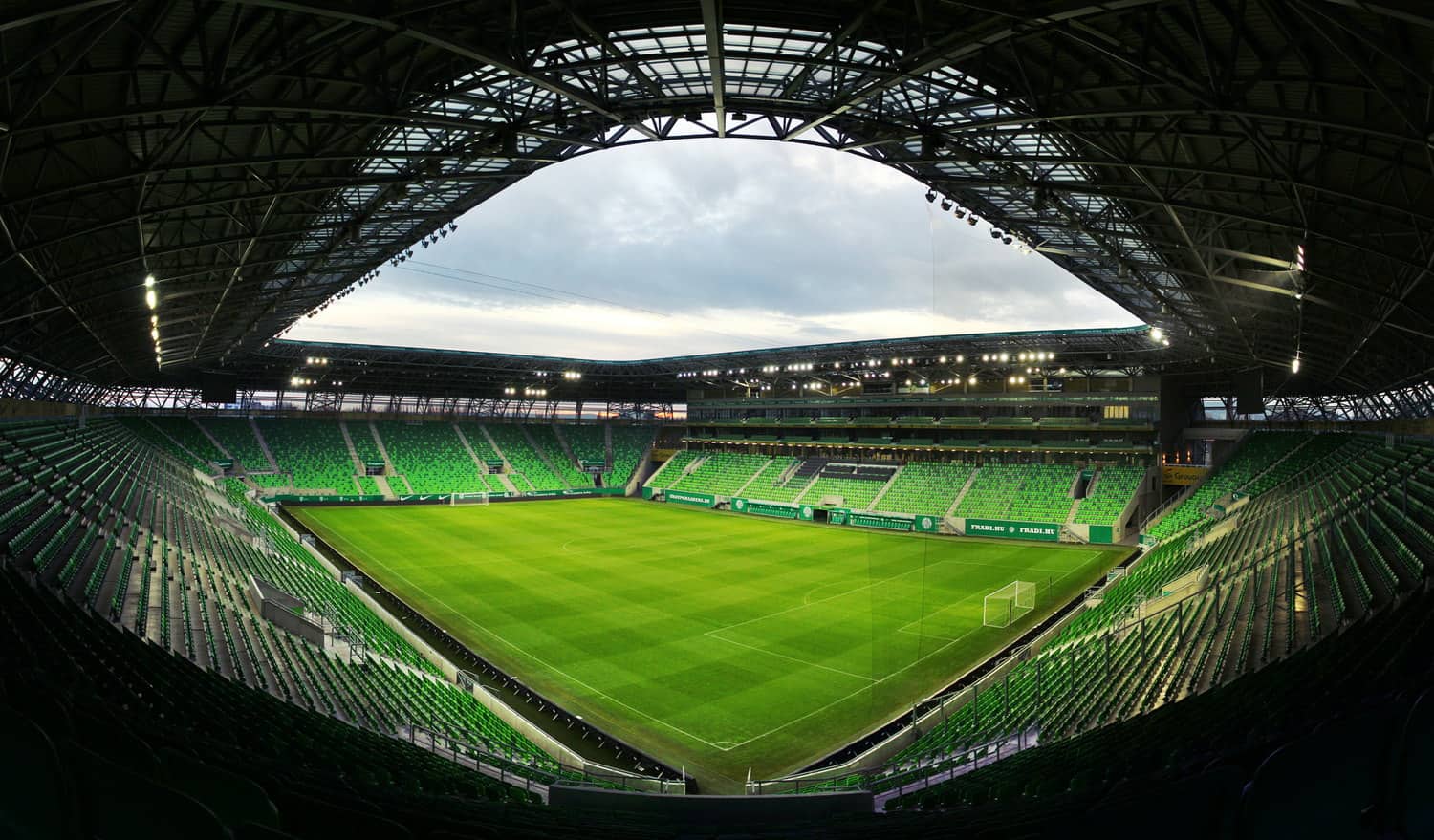 Ferencvaros Stadion has a capacity of 22,000. It was built on the site of the former Flórián Albert Stadium, the club’s previous home, which was demolished in 2013.

The Hungary international team’s first game at the stadium was a 2-1 defeat to Northern Ireland in September 2014. Michael O’Neill was manager and Alan Mannus an unused sub that night.

Ferencváros has been the most successful Hungarian club in European competitions having won the 1964/65 Inter-Cities Fairs Cup. They became the first Hungarian club to enter the group stages of the Champions League in the 1995/96 season.

Stanislav Cherchesov was appointed manager in December 2021. He was in charge of the Russian national team for five years. In the 2018 World Cup, as hosts, it was the first time since 1970 they reached a quarter-final. However, Cherchesov was sacked in July last year after failing to advance from the Euro 2020 group stages.

Ferencvaros have won four league titles in a row and they did it with a 12 point margin last season. Their top scorer was Moroccan forward Ryan Mmaee with 13 goals. The Nemzeti Bajnokság club have won their opening two games of the 2022/23 campaign, scoring five goals and conceding none.

Hungarian international goalkeeper Adam Bogdan and former Rovers defender Joey O’Brien spent four seasons together at Bolton Wanderers from 2007 to 2011. After Liverpool, he joined Wigan Athletic in 2016/17 at the same time as Jack Byrne. Bogdan made 17 league appearances in that campaign and Jack only two.

Ferencvaros are 83rd in UEFA Coefficent rankings and Rovers are 146th. Ireland have moved up to 36th place while Hungary are in 25th.

League of Ireland clubs have never beaten a Hungarian side in 13 games, most recently Bohs’ penalty shootout defeat to Fehervar in 2020 in which Andy Lyons played. Rovers’ only previous meeting was against Honved in the 1985 European Cup. The Hoops were beaten 5-1 on aggregate with John Coady scoring at Milltown.

Rovers have won two ties in a single European campaign for only the second time ever (after 2011) and this was the first time the Hoops won three (and now four) games in one European campaign, or won three games consecutively, whether in one season or spreads across two.

Rovers in Hungary are looking to go four games unbeaten for only the second time in the club’s history after 2018 to 2019 (AIK away, Brann home and away, Apollon Limassol home).

Shkupi was Rovers’ ninth European away win and the Hoops also won the home leg of the tie on seven of those occasions.

It’s the first time ever that Rovers have won both legs of a tie in successive seasons, and only the second time after 2010 and 2011 the Hoops won away games in successive campaigns. It’s the third time Rovers scored three or more goals twice in the same campaign (1966 and 1982).

Rovers are now only one behind Dundalk’s record of 14 European ties won. Only Dundalk have won three ties in one European campaign (2020) but Stephen Bradley’s men have equalled Bohs’ four games won in 2021.

Alan Mannus made the 50th European appearance of his career in North Macedonia (Linfield, Rovers and St Johnstone). Mannus kept his 94th league clean sheet in Derry last Friday, leaving him just three behind Barry Murphy. It was his 113th clean sheet in all competitions, now seven behind Alan O’Neill’s all-time record.

Sean Gannon could make his 50th European appearance in the return leg in Tallaght. Gannon and Ronan Finn are both set to play in a European group stage for the third time in their careers. It will be a second group stage appearance for Sean Hoare, Dan Cleary, Alan Mannus and Chris McCann.

Ronan Finn, suspended for the first leg against Ferencvaros, is now just one game away from Gary Rogers’ League of Ireland record of 54 European appearances. Finn has made 37 of those appearances for Rovers, so he can better Sean Gannon’s feat of 38 European games for a single club (Dundalk).

Aidomo Emakhu has scored a goal in the Champions League, Europa League and Conference League. He is one of only three players in the current squad with three European goals for the club, despite not starting any of his six games and spending just 77 minutes on the pitch.

Rovers are now 21 home games unbeaten in all competitions (23 at Tallaght Stadium including the President’s Cup and Bangor Celtic FAI Cup ties), their longest run since 1987. One more against Dundalk on Sunday would be their best run since 30 between September 1983 and February 1985.

It’s 23 league games unbeaten in Tallaght, their longest streak at home since 24 league games without defeat from October 1983 to February 1985.