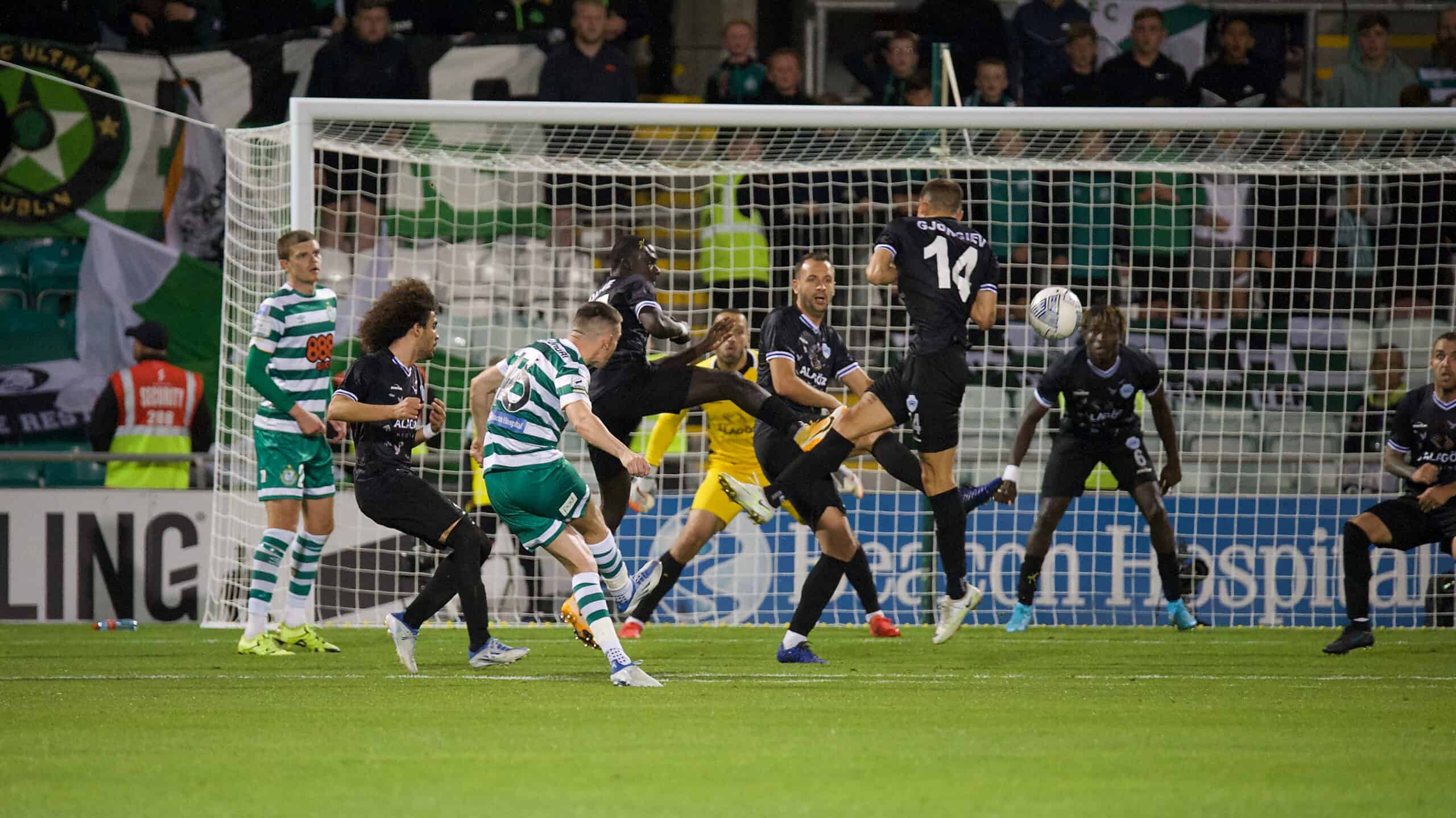 It was another memorable European night at Tallaght Stadium on Thursday evening as the Hoops defeated North Macedonian side KF Shkupi 3-1 in the first leg of the UEFA Europa League third qualifying round. A crowd of 6,455 gathered as goals from Graham Burke, Dylan Watts and Gary O’Neill ensure the Hoops will take a two-goal advantage to Skopje next Tuesday for the return leg.

Rovers started the game on the front foot as they pushed for an early breakthrough. That opportunity would present itself after just 13 minutes. Andy Lyons was taken down in the box and referee Bartosz Frankowski had no hesitation in pointing to the spot. Graham Burke stepped up and coolly dispatched the penalty into the bottom right corner for his 7th goal in Europe for the Club.

It was the perfect start for the Hoops and 16 minutes later, we doubled our lead. A brilliant team move, which started with Alan Mannus, resulted in Dylan Watts working some space in the box and he slotted the ball past Kristijan Naumovski in the Shkupi goal for his second goal of our European campaign. Rovers were now in the driving seat and full of confidence as we dictated much of the play. Despite our dominance, the Hoops couldn’t extend our lead before the break as we went in two goals to the good.

Shkupi enjoyed a period of possession early in the second half with Alan Mannus forced to pull off a series of impressive saves to keep a clean sheet intact. Shkupi’s had a glorious chance to half the deficit when the ball was deflected into the path of substitute Adem Ali who was unmarked in the box, however, his effort was saved by Alan Mannus when it looked like being a certain goal. A warning for the Hoops.

Shkupi’s inclination to shoot on sight would pay off 15 minutes from time when Brazilian midfielder Queven let fly from all of 30 yards. The ball moved in the air, deceiving Mannus in the Hoops goal, as Rovers’ lead on the night was cut in half.

Any suggestion of momentum being with Shkupi was killed when minutes later, attacker Walid Hamidi received his marching orders for a late tackle on Gary O’Neill. Hamidi will now miss the second leg in North Macedonia next week.

As the game entered the closing stages, Shkupi shut up shop and appeared content to take the tie back to Skopje seeking to overturn a one-goal deficit. The experienced Kristijan Naumovski in the Shkupi goal used every trick in the book to run down the clock, however referee Bartosz Frankowsk was on top of the antics, instructing 6 minutes of additional time to be played. As the clock ticked past the 96th minute, Rovers earned a corner. Sean Kavanagh put in a dangerous delivery, that the Shkupi ‘keeper came and missed. Sean Hoare did brilliantly to keep the ball alive before teeing up Gary O’Neill at the edge of the area who curled a stunning strike over the Shkupi defender on the line to send Tallaght Stadium into raptures. It proved to be the last kick of the game as the Polish official blew for full time before the restart.

Speaking to RTE after the game, Stephen Bradley said: “I’m delighted. The fans were fantastic again. We weren’t at our best but we got the win and we know we have a real game on our hands next week.”

“It’s very tight. We need to go there with the mentality of trying to win the game. We can’t go there with any other mentality because they showed for 20 minutes in the second half that they have the quality to go and hurt us.

It was another special night for Rovers in Europe as we now take a two-goal advantage to North Macedonia for next Tuesday’s return leg. Kick off 8pm (Irish Time).