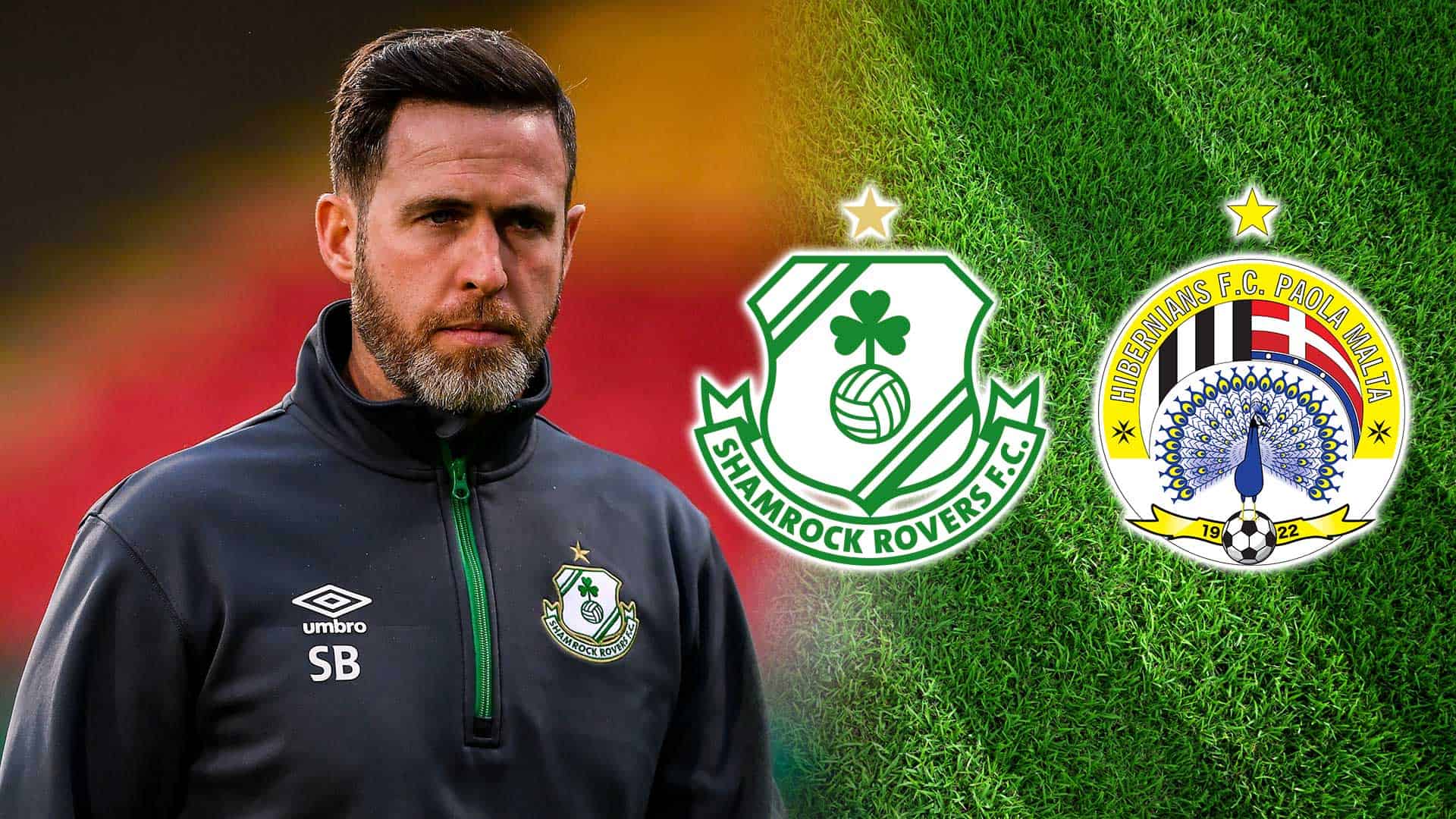 The Main Stand and South Stand are already sold out!

Over 5,000 tickets have been sold (note that season tickets do not apply to European games) and a healthy walk-up crowd is expected. Tickets available at shamrockrovers.ie or at the ticket booths tomorrow from 6.30pm.

Stephen, another three points last Friday in Ballybofey, were you pleased to meet the target of nine out of nine to take us into Europe?

Yes, we spoke a few weeks back when we came back from the break, that it was important that we picked up these nine points going into Europe and we could focus fully on Europe, knowing that we’ve done our work in the league. And thankfully we’ve managed to do that.”

We had a huge amount of possession especially during the first half as they set up to frustrate us. Were you confident the goal would come if we were patient?

“We’ve faced that quite a bit this year, both home and away, and we’ve learned to trust what we do and relax when we’re in that possession and feel comfortable in that moment. We knew the goal would come. The timing of the goal was really good and we knew it would come if we just kept probing and kept working it, and thankfully it did.”

How good a strike was that from all of 25 yards from Rory Gaffney?

“It’s a brilliant strike and left-footed. Rory from anywhere, left or right foot is dangerous. We’ve seen that a number of times this year and thankfully we saw it again on Friday night.”

“We didn’t create a lot of clear-cut opportunities in the second half but some of our play was still good, just the final bit was lacking. Aidomo would be disappointed with the one on one because you’d really fancy him in that situation. But Aidomo was good when he came on, he held the ball up really well, looked lively and caused them a few problems.”

So that meant we can focus on Europe now. What do we know about Hibernians as an opponent?

“We’ve watched quite a lot of them. There are a lot of changes in their team whether it’s through suspension or players leaving. They’ve brought in a lot of players in the last two weeks so we’ll have to have a look and see how they set up. We have a real feel for them from last year but with the new players, they might change their system and might change how they play. So we won’t know until we get on the pitch tomorrow night.”

We saw how Teuta approached the first leg in Tallaght last year and there’s also the recent factor of the no more away goals rule. What sort of style are you expecting Hibs to bring here?

“They’re always possession-based teams, they always have been. They went and played Flora Tallinn last year and had the majority of possession in both games. So we know they like to play with the ball. They’re technical, they’ve got technical players and real pace out wide. They played a similar system to ourselves for a large majority of last year but they’ve also changed to a 4-3-3 as well, so we’ll have to wait and see how they set up tomorrow.”

As you mentioned, they have a number of suspensions and brought in a few new players as a result. Does that make it a bit more difficult to scout them?

“It does because they’re bringing in players at the last minute and the team you’re watching from last year is going to have a lot of changes in it because of the suspensions, and players that have left and the players that have come in. So it does make it more difficult to have a real feel for them, we probably won’t have that until half time tomorrow night.”

Richie Towell returned on Friday. Was Sean Gannon OK after coming off and how are the others doing – Jack, Danny and Neil?

“We’ll have to check on Sean Gannon. Jack Byrne, Graham Burke, Danny Mandroiu and Neil Farrugia will be out.”

So Champions League football is back in Tallaght, have the players been really looking forward to this and do they relish the challenge of this level?

“European nights are always special in Tallaght, we’ve seen that over the years. We’ve had some brilliant nights and hopefully we can have a massive crowd tomorrow night to help us, because it’s going to be a difficult two games. Hopefully it’s a big crowd and everyone, all the players and the staff are really looking forward to the game.”

The importance of the occasion won’t be lost on anyone. Do you feel the players have shown many times before they can handle that pressure?

“Yes, I think they’ve shown in the last 3 years that when the pressure is on, they step up. They’ve shown that a number of times. We have a lot of experience in Europe as a group, some good, some bad but we’ve learned from them. Hopefully we can show that it’s made us better and stronger this year.”

It could be a full crowd for a European home game for the first time in a few years, do you anticipate another great atmosphere just like those Tallaght nights in the past?

“Hopefully, because we’ll need it. There are no easy games in Europe, we’ve seen that in the past few years so we’re going to need the crowd. The fans have been unbelievable for us this year, like they have been the past few years but this year we’ve had some brilliant numbers come through the gate. Hopefully, we can have that again tomorrow night. The players and the staff feed off that energy and that passion and we’ll definitely need that tomorrow night.”