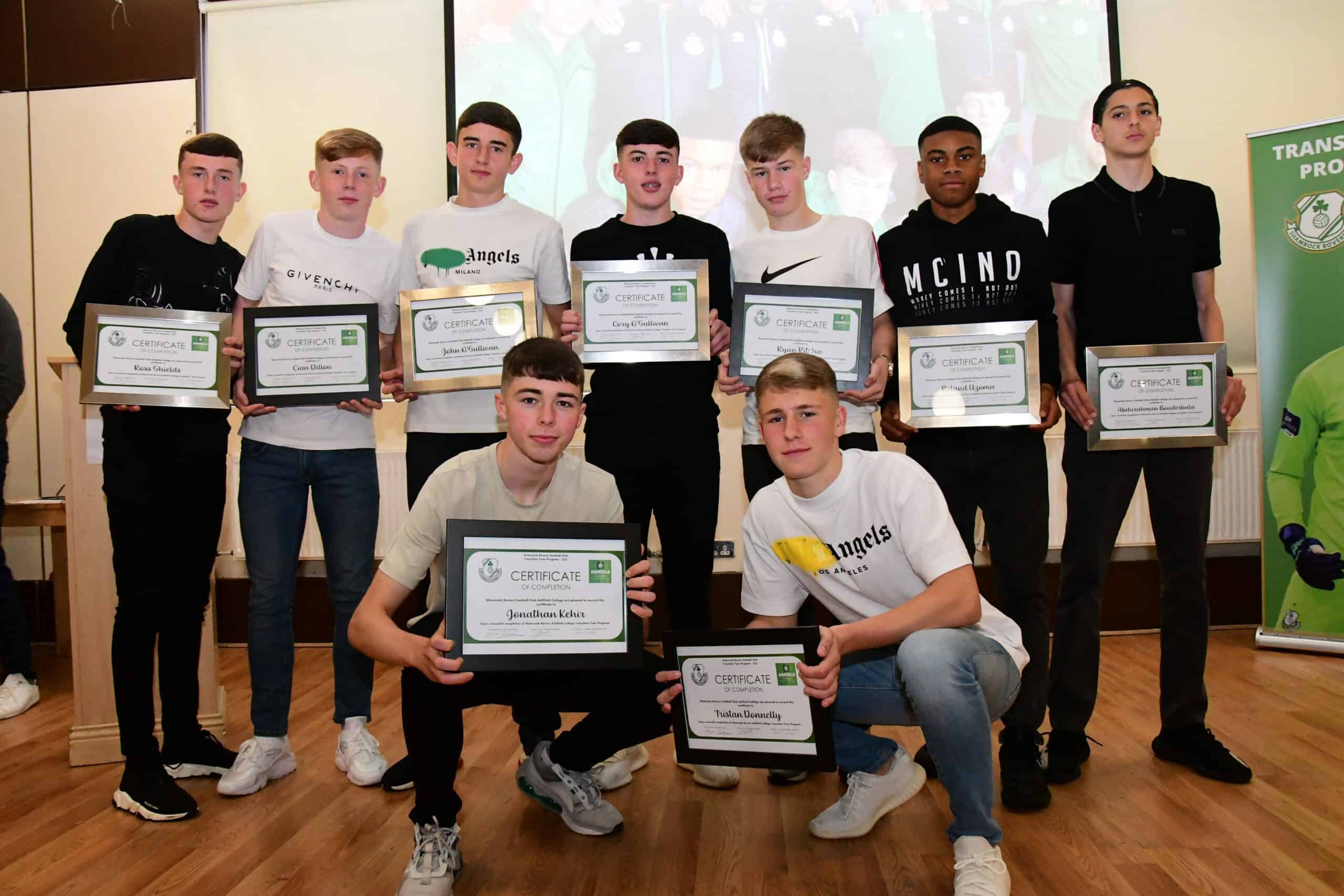 A very special event took place on the last Wednesday of May at the Shamrock Rovers Academy at Roadstone when a graduation ceremony was held for the first ever class of the SRFC/Ashfield College Transition Year Programme. Amongst the large gathering present were the young boys and girls who will make up the next group in the programme due to begin in September.

Graduating this year were

Jonathan Roche addressed the gathering and gave the background to the formation of the SRFC Academy. He spoke about the club’s journey to find a suitable location as a playing and training base. Shane Robinson had come to the board and presented a plan for the development of an academy and this, along with the agreement that the club came to with the Roadstone Group for the use of the facility at Kingswood, saw the start of something very special. It was during the senior team’s participation in the group stages of the Europa League in 2011 that the board saw the facilities and academy structures that other clubs had and decided that Shamrock Rovers needed to follow suit.

Roche approached Declan Fitzpatrick at Ashfield College with a view to collaborating in a programme that would provide young players with the opportunity to train full time and not miss out on their education while doing so. The initiative got underway with some young players studying at Ashfield College while also training full time at SRFC. In the academic year of 2021/22 a new dimension saw a class of Transition Year players based in their own classroom at the Academy at Roadstone. The further development of the hall with Astro pitch and gym enabled the boys to have all the facilities that was required for the programme under one roof.

Philip Curry spoke on behalf of Ashfield College. He spoke of how wonderful it had been to have the group of 2021/22 participating in the programme and how good the boys had been. He gave a breakdown of the subjects that had been taught during the year. The programme will be extended in the new academy year to include more subjects. In taking part in this year’s programme the boys not only got to spend time developing themselves as footballers but also would not be at a disadvantage going into 5th year next year as they had been able to continue their education along with their football programme.

Steven Gray mentioned that every other club always wants to beat Shamrock Rovers and that a big part of the programme had been to prepare the players mentally for the challenge they face as well as the physical challenge. It was very important to develop the mindset of the players. SRFC Community Officer Tony O’Neill also addressed the gathering. Throughout the year O’Neill himself had helped teach the boys to learn how to know more about themselves and understand themselves mentally. They needed to know what the future held for each of them and how to approach their future.

Each one of the young players took to the floor and gave their own detailed account of aspects of the module they had learned during the year. The mental side of the game was just as important as the physical side and the year spent on the TY course had improved their all round skills on and off the pitch. They each spoke with confidence and self-belief. It would be fair to say that twelve months ago they would not have shown the same willingness to stand up in front of a full hall and speak about themselves in the manner in which they did. They spoke about everything they had learned during the year.

Steven Gray, who led the strategy design for the TY Programme, thanked all who had been involved during the year. There was an impressive list of people from both Ashfield College and within Shamrock Rovers who had all contributed in their own special fields. The result of this was on display in the group of players who had taken part in the pioneering project. The group of academy players who will come on board in September and who were present could not have been anything but impressed and no doubt they are all looking forward to the exciting time ahead as they become the next group who will take this exciting programme forward to another level.

Philip Burke and Jonatan Roche then presented each of the players with a personal letter from Steven Gray, their assessment results from Ashfield College and a framed certificate.

Well done to the class of 2022 and to everyone involved in this wonderful initiative.