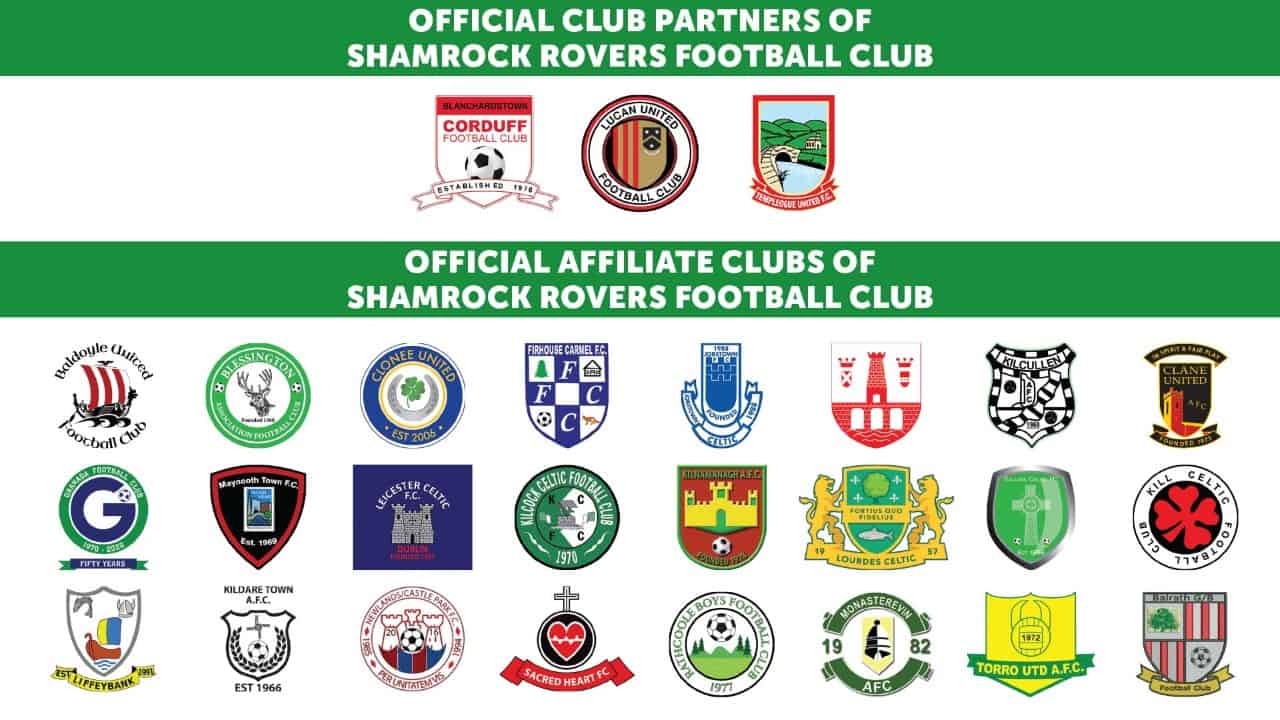 The Partnership and Affiliate model being operated by Shamrock Rovers is designed to bring the community closer to the club and is playing a big part in developing awareness of the club in the community. Developed by SRFC Academy Director Shane Robinson a number of years ago along, the programme now has established links with Partner clubs Lucan United, Templeogue United and Corduff FC, and has grown considerably with Affiliate clubs (24) from all over Dublin as well as Meath and South Leinster now also on board.

It enables Shamrock Rovers to share expertise in coaching by having coaches visit the partner clubs once a month to coach coaches within those clubs and to show how things are done at the SRFC Academy. “We also have their players, relative to their ability, coming over to their respective age groups training in Roadstone with Rovers’ teams”, explains SRFC Community Officer Tony O’Neill. “We have evolved further, we have the partner club teams coming over to train in Roadstone every second week with our Development coaches. We have the equipment to do strength and conditioning work; they do fifty per cent of the session on athletic development and then the other fifty per cent on technical development skills in the hall. It is an hour and a half every second week. We are really excited about that because it has evolved the model of the partner clubs so we have a lot more interaction going forward with those clubs”, O’Neill further explains.

For the Affiliate Clubs, the programme differs in that SRFC coaches go out to those clubs and put on sessions for their coaches. “We don’t coach their players, we coach their coaches once every four to six weeks. We are working with twenty plus Affiliate clubs. We go out and coach their coaches and they bring their teams to football matches in Tallaght Stadium. We ask them what they need, we don’t tell them how to play the game or how to coach the game, we show them what we do in Roadstone, but we also get familiar with them and establish and grow relationships with them and ask what area of their clubs we can help them with. If they come up with a couple of ideas or a needs analysis then we help them with that.”

The initiative is growing all the time. In addition to O’Neill, SRFC coaches Joe Adibekov and Eoghan O’Meara are working in set areas. Another SRFC coach Aziz Kadabaya is also assisting. Relationships have been established as far as South Kildare in Monasterevin and Athy. The club is also working in County Meath with Toro United and Balrath Girls and Boys Football Club. On the north side of Dublin, it extends out as far as Baldoyle United and on the south side to Granada FC and Leicester Celtic so it can be seen just how big a geographical area that is being covered.

Eoghan O’Meara is covering the North Kildare region. He is currently working with Kilcock Celtic, Maynooth Town, Blessington FC and Rathcoole FC and is hoping to see some other clubs come on board soon. “A couple of weeks ago we did something a little bit different where we brought down a Rovers team and a representative team from the NDSL to one of the affiliate clubs, Kilcock Celtic”, explains O’Meara. “I put on a session for the coaches as they were watching the game, they were looking at the tactic board but mostly looking at how the 2009s, how they played, their style of play, the type of individuals and the information given by coaches. That’s what the night was about, watching the coaches from that club to watch the coaches in action, to watch the team in action and the play and to see everything like that. The feedback was absolutely brilliant, they really enjoyed it and took a lot from it.”

Former SRFC Schoolboy player O’Meara, who played for the first team under Damien Richardson, is also involved with the Summer Camps run by Shamrock Rovers in conjunction with the Partner and Affiliate clubs. “The camps have been a huge success for them, they love them, they have been well run and well organised. The feedback has just been brilliant and they can’t wait to do more. All the clubs that we are working with are looking to do more or asking how they can do more or can they get more of an affiliation with Shamrock Rovers. That obviously leads in getting the players and the parents to the stadium for first team games.”

The word has been getting around. More clubs are looking to become involved and that can only be good for everyone. “They see the positivity from it that it’s linked to it and thankfully at the moment Rovers are flying, really doing so well and everything they are doing and they see the link; they’re getting into Tallaght Stadium watching matches but then also seeing how their club can be helped by ourselves and coaches from Shamrock Rovers going to their clubs and trying to help their coaches which will then help their club and their players. It’s positive all round, they can see the benefits from it massively.”

While O’Meara is covering the area of North Kildare, Adibekov is operating in the area south of there. “My involvement with our Affiliates is to build a working relationship with clubs in predominately, but not limited to, the Kildare area. I am very privileged to be a small part of the academy here at Shamrock Rovers and perform this function as part of my role here where I am lucky to work with some of the best players, within the best structures and with some of the best people in football in this country”, he says.

“Shamrock Rovers are the closest SSE Airtricity Premier Division Team in proximity to people in Kildare and I felt growing this connection would be mutually beneficial as we aim to work together in order to improve the overall football experience at these clubs for players, coaches and parents while also aiming to grow awareness and support for our football club.”

Adibekov covers most of Kildare with the exception of the clubs that were already under the stewardship of O’Meara before Adibekov himself became involved. “I currently work with Sallins Celtic, Kill Celtic, Clane United, Kilcullen AFC, Athy Town AFC, Kildare Town and Monasterevin AFC where we visit them once every 4-6 weeks and demonstrate sample training sessions to coaches and share our ideas with them. Furthermore, we offer our support to clubs on any other matters assistance relating to football or club administration.

“We aim to get to visit each club every four to 6 weeks and put on a coaching workshop where we would demonstrate sample training sessions for coaches in the various formats of the game from 5-aside, 7-aside, 9-aside to 11-aside. We understand that most coaches are volunteers and often coach after work under difficult constraints such as time, space and often with little or no support so we aim to make our sample sessions concise, simple with a clear theme so they are practical and easily applicable. For example, our first session with the clubs was centered around passing & receiving and our second one was with a dribbling theme predominately but not limited to Under 8s/Under 9s with coaches of older and younger age groups also finding some of the content useful.”

The overall benefit to Shamrock Rovers is not only to establish a good relationship with other clubs within a wide catchment area of the club’s base but to also get new fans of the club to come along to games at Tallaght Stadium. The aim is that the more Rovers can put into those clubs then those clubs can guarantee more people at the games in Tallaght Stadium and that can justify spending more time with particular clubs. It’s getting to know people at clubs that are within a travelling distance to Tallaght.

“Those people are out there”, says Tony O’Neill. “They want to get involved in this type of programme. We can help them to run a football team. Those clubs are relying on volunteers with basic skills and we help them with our volunteers as much as we can.”

Although in relative infancy, judging by the number of adults and children filtering into the East Stand at Tallaght Stadium on Friday nights, the Partnership and Affiliate programme is bearing fruit and the overall benefits are mutual for both Shamrock Rovers and the clubs involved. The initiative is a very good example of how people in the game in Ireland can work together for the overall good of the sport in this country.

If your club would like to get involved, come and talk to us; contact the Academy 01 4594569 on or email [email protected]