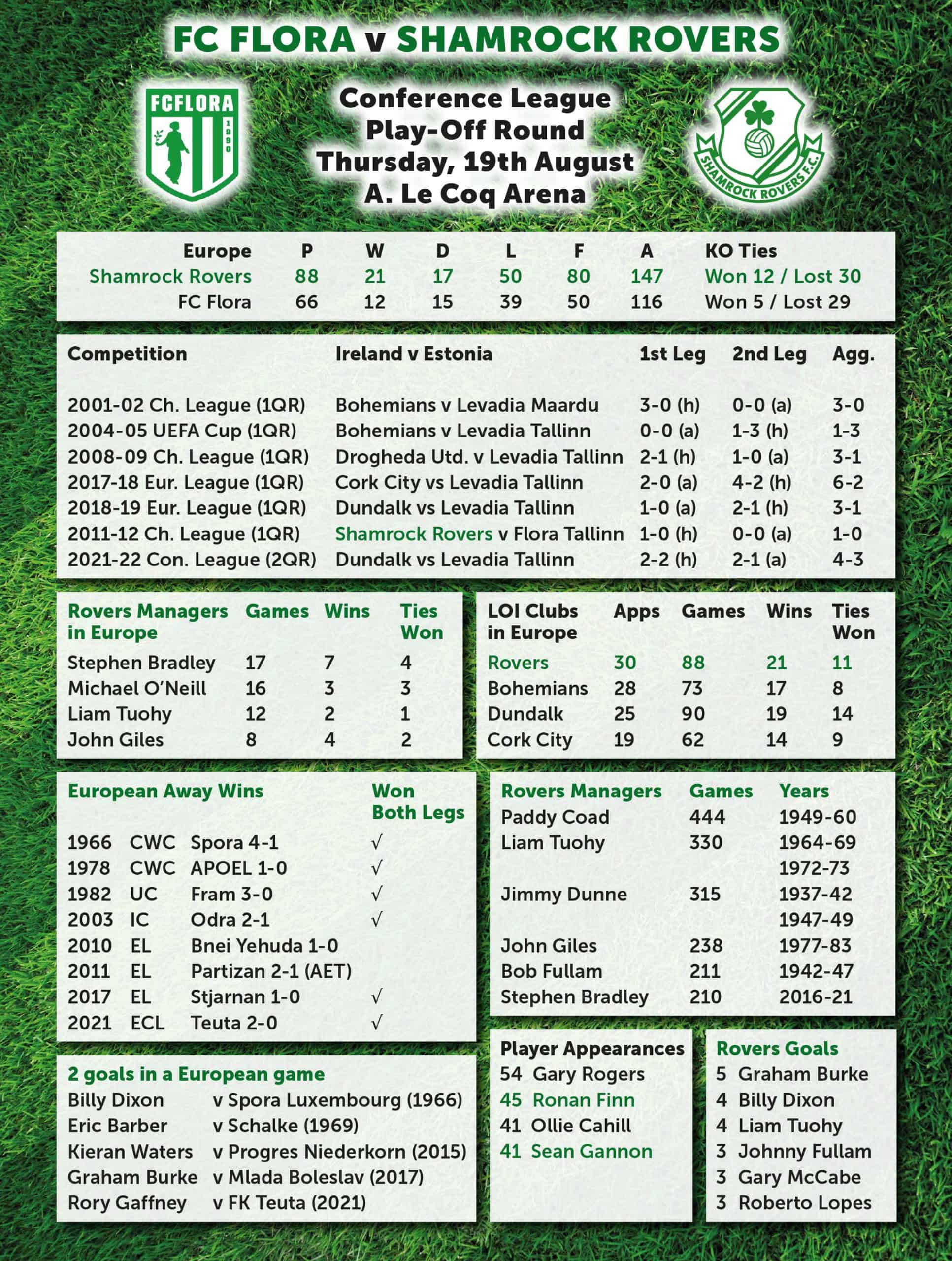 FC Flora, the most successful club in Estonia, have won back-to-back league titles. They won last year’s Meistriliiga by 16 points, losing just one game. This season Flora are 12 points behind leaders Levadia Tallinn, who Dundalk beat 4-3 on aggregate in the second qualifying round of the Conference League.

Flora suffered their first loss of the 2021 campaign with a shock 1-0 defeat at bottom of the table Kuressaare at the weekend but they still have three games in hand on Levadia. 34-year-old Jürgen Henn was appointed manager in January 2018, leading the club to two league wins.

The Flora squad is made up entirely of Estonian nationals, including 22-year-old midfielder Marcus Poom. Born in Derby, he is the son of former Derby, Sunderland and Arsenal goalkeeper Mart Poom.

Flora’s top scorer in the league is Rauno Sappinen on 12 goals. Sappinen, who scored both goals against Omonia last week, is also their only ever-present in the league having played all 17 games.

Flora play in the A. Le Coq Arena. With a capacity of 14,336, it is the home of the Estonian international team. Shamrock Rovers drew 0-0 here in the 2011 Champions League first qualifying round to go through 1-0 on aggregate. Alan Mannus, who had saved a penalty in the first leg, and Ronan Finn played that day while a 20-year-old Sean Gannon also travelled with the squad.

If he features in this tie, Sean Gannon can join Ronan Finn in the top three all-time appearance makers for League of Ireland players. Gary Rogers played 54 European games in his career, Ronan Finn is on 45 and Gannon is currently level with Ollie Cahill on 41. Finn has never scored a European goal.

31-year-old forward Rauno Alliku is Flora’s only survivor from that previous meeting with Rovers in 2011, having been with the club since 2008.

Flora have only failed to qualify for Europe once in the last 27 seasons and that was in 2014. They are in 181st place in UEFA’s coefficients compared to Rovers in 254th going into the 2021-22 season. In association rankings, Ireland are 42nd with Estonia in 51st.

Flora beat Hibernians of Malta 5-0 on aggregate in this season’s Champions League qualifiers before going out to Legia Warsaw. In the Europa League, the Estonian outfit beat Omonia Nicosia of Cyprus 2-1 after extra-time in the second leg at home before losing the tie on a penalty shootout. It’s Flora’s second time in a play-off round as they made it to this stage of last year’s Europa League, eventually losing out to Dinamo Zagreb.

Flora had also met Dinamo Zagreb in the 2001 UEFA Cup and they have played Brondby on two occasions (2006 UEFA Cup and 2009 Europa League) whereas this the first time in history that Rovers will meet the same team twice in European competition.

In 14 games played between League of Ireland and Estonian sides, Bohemians, in the 2004 UEFA Cup, are the only Irish team to lose. Stephen Kenny was sacked as Bohs manager after that result.

In the 2-0 second leg win at the Elbasan Arena in Albania, Chris McCann came off the bench to make his first European appearance since the 2013 Europa League group stages with Wigan Athletic. Rory Gaffney scored the first European goals of his career.

Gaffney became the fifth Rovers player to score a brace in Europe and only the second to score two goals in one game away from home. The other was Billy Dixon in Luxembourg in the 1966 Cup Winners’ Cup.

Only a controversial late goal by the legendary German striker Gerd Muller saw Bayern Munich scrape past Rovers in the next round of that Cup Winners’ Cup campaign. Bayern went on to lift the trophy, which remains the only instance where Rovers lost to eventual competition winners. Muller sadly passed away at the age of 75 last weekend.

It was Rovers’ biggest aggregate victory since defeating Progres Niederkorn 3-0 over two legs in 2015 and their biggest away win since beating Fram Reykjavik 3-0 in 1982.

Gaffney opened the scoring in the 20th minute in Albania. The earliest European goal that Rovers have scored in the Tallaght era was by Ken Oman when he netted in the 12th minute in Kazan in the 2011 group stages. Rovers haven’t scored in the first 10 minutes of a European match since Richie Purdy gave the Hoops a sixth minute lead against Altay Spor in the 1998 Intertoto Cup second leg at Tolka Park.

This is only the second time in the Tallaght era that Rovers are playing away from home in consecutive European knockout ties. The other was the 2011 Champions League when Rovers advanced in Tallinn and then travelled to Copenhagen in the next round just eight days later.

Last week was the first time that Rovers went through a round in Europe after the away leg since Partizan Belgrade, when the Hoops became the first Irish club to reach a European group stage. Rovers have won three consecutive European games for the first time ever.

Rovers have won eight games in a row in all competitions for the first time since September 1987, which was a run of nine games spread over four different competitions and two different seasons. It was ended by a 1-0 defeat to Omonia Nicosia at Tolka Park in the 1987 European Cup. It’s the first time that Rovers have eight consecutive wins in one campaign since March 1987, when the Hoops won eight league games and two FAI Cup matches all in succession.