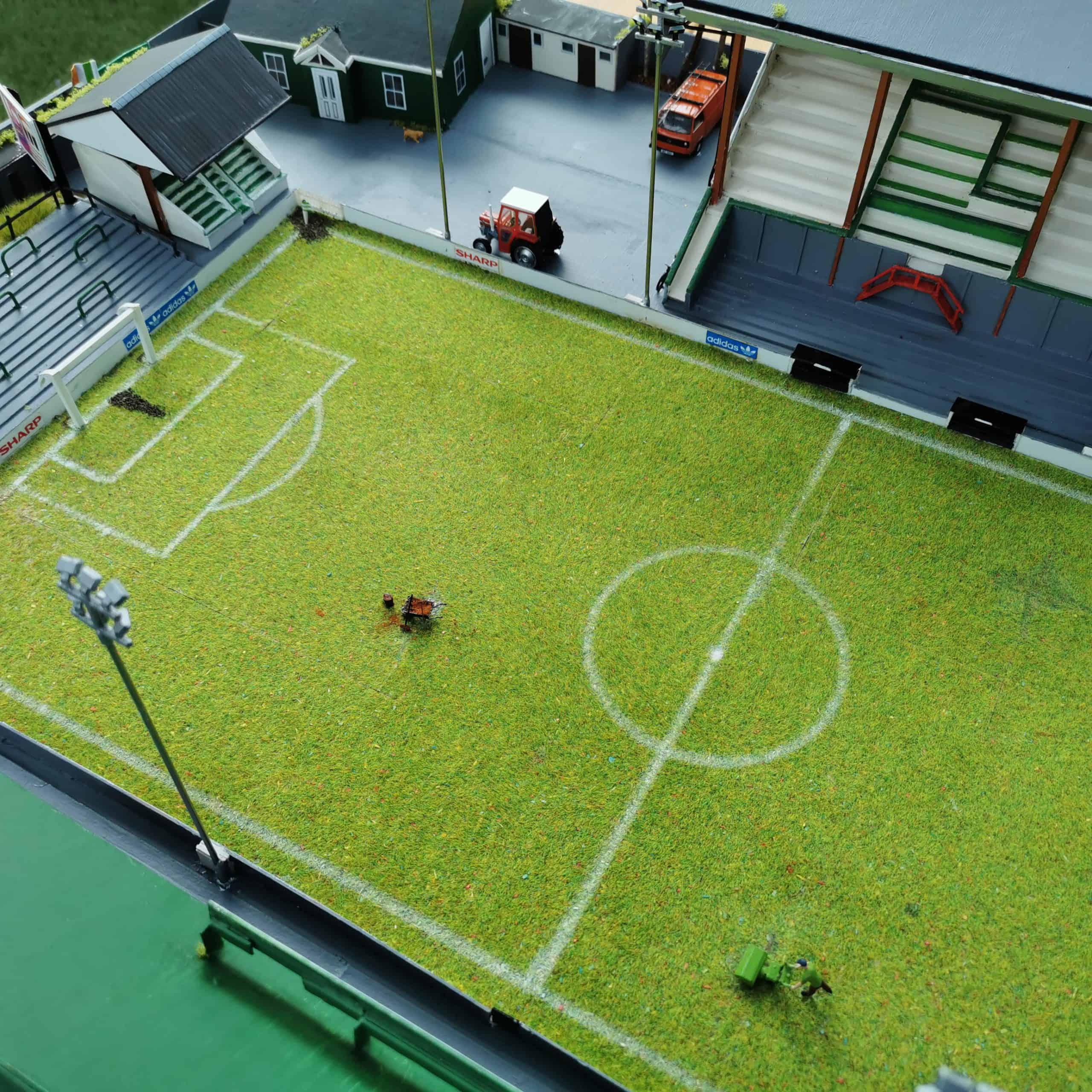 This article originally appeared in Hoops Scene on 30th July 2021

Not everything about the pandemic was bad with many people suddenly finding themselves with that bit of time on their hands to do what they had always intended to get around to. Well-known Hoops fan Mick Kearns certainly did just that and the result of a project he put a lot of time and effort into is a scale model reconstruction of Glenmalure Park – home to Shamrock Rovers from 1926 to 1987. The Irish Daily Star newspaper has run an article on Mick’s project this week and it is also due to be featured on SRFCTV.

Mick told us: “I’m into model railways and I always had it in my head that I wanted to replicate Milltown. When the lockdown began in March 2020, I thought this was an opportunity and I just went for it. I thought I’m not going to sit down and look at the telly all the time so I got a few photographs (of the ground) and started with the pitch. I always wanted to do it and it was in February 2021 that I put the final touches to it.”

The attention that Mick paid to detail is incredible and the finished project is sure to rekindle fond memories for anyone who was a regular fan up to the time Glenmalure hosted its final game in April 1987. “It’s all hand made and it’s made to a scale of four millimetres to a foot. That’s how I also built all the buildings in my model railway that I have in the attic. It’s built with cardboard, scapple, corriboard and all sorts of good modelling material that I would use fairly regular. “I would say the main stand was the hardest part because I wanted to get the detail done properly and the side panels and roof too. The terracing was a bit awkward at stages; I done up a couple of dummy runs, threw them out and started again but the great thing was that I was under no pressure and was in no hurry to finish it.”

Mick says it was a labour of love. He spent a lot of time getting his hands on as many photographs of the old ground on Milltown Road as he possibly could. “I scanned websites, searched archives and I put the photos on the wall all around the room I was working in so I could visually reference these all the time. That’s how I put the whole thing together plus I worked in the stadium, I did loads for the Kilcoynes, I did the wiring for lights in the turnstiles and for the floodlights, I put the p.a. system onto the pylons, I remembered every detail in my head of the ground and the photos rejiggled my memory also. There was also an Ordnance Survey image of the ground which helped me to really home in on.”

Now the model is complete what does Mick want to do with it? “I’d love the fans to see it, particularly the ones that were around at the time. We’re getting to the other side of the fence and it will get to the stage where nobody from that time will be around and Milltown will be gone completely. I want the new generation to see where we played and to give them a visual of the ground. I didn’t want it to be forgotten because the memories we all have from being there are just magic. Going to see Rovers in Milltown was special.”

The model will go on display at Tallaght Stadium. “I will get a cover for it to protect it because if people were putting their hands onto it that would destroy it. It will have to be kept out of direct sunlight also. In the ground in a cabinet so everyone can see it is what I would like to do.”