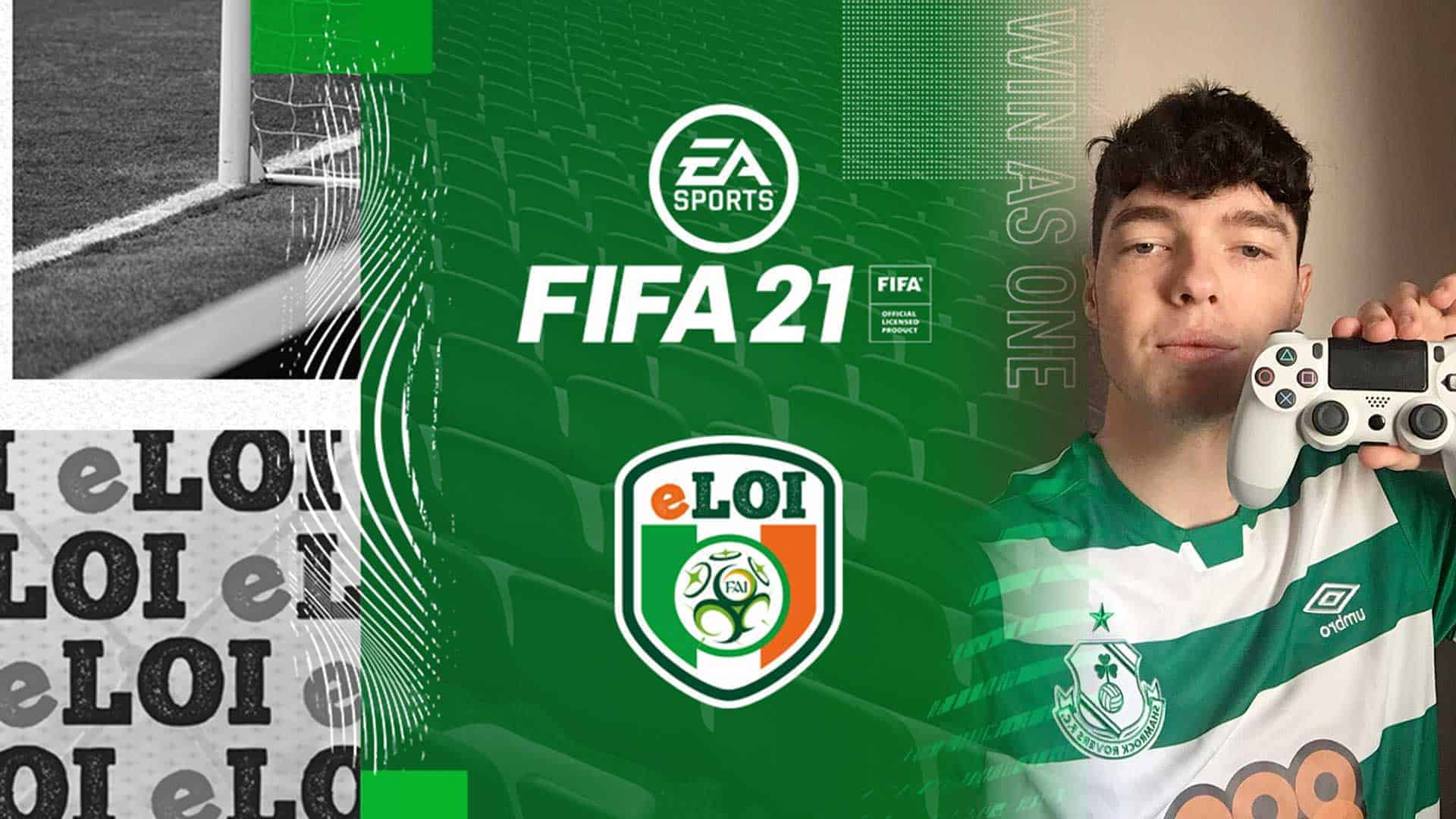 The inaugural eLOI tournament kicks off tonight and Tyrone Ryan is playing for Shamrock Rovers!

Officially ranked by FIFA21 as the best player in Ireland and an astounding #34 in the world, “mad passionate” FIFA player Tyrone Ryan will represent Shamrock Rovers in the e-League of Ireland which kicks off tonight.

We spoke to Tyrone to discuss his journey from a Career Mode player all the way to representing Ireland’s number 1 on the National stage.

When asked how he got into FIFA, he replies that it all stemmed from his love of the beautiful game and recalls the halcyon days of the PlayStation Portable (PSP). “I love football and have always played FIFA. Aged 7 to 9, I was playing offline with Career Mode on the PSP. In 2016, I started playing online and it took off from there.  In 2019, I decided to pursue it as a pro”.

Tyrone qualified to represent Rovers after coming out victorious in the 32-player qualification tournament which was hosted on the rivals.com platform in early March. The modest player remarked that the standard was high and that he’s excited to get going. “It means a lot. It’s a great opportunity to represent the biggest club in Ireland. It’s a big opportunity for me to progress”.

Speaking to Tyrone, his passion is evident, and he cannot wait to get going next week. “I’m ready now. I am really looking forward to it. I love FIFA”. In terms of preparation, he tells me that he plans to play some practice games against some pros in the lead up to the tournament.

We asked Tyrone as to the style of play he is known for and he explained that his pressing is his biggest strength, something which undoubtedly suits Rovers. “I have a good press. My player switching is good when my opponent has the ball at the back. It gives me a better opportunity to score goals”.

Discussing football a bit more, we posed the somewhat controversial question as to who the best player of all time is? Tyrone needs no time to dwell on that one though; “Lionel Messi. He’s the GOAT [Greatest of all time]” he says confidently.

He also alludes to the impressive nature of Gavin Bazunu’s recent performance on his senior debut for the Republic of Ireland. Tyrone sums up the young keeper’s assured performances in one word: “Wow!”

Finally, we return to the topic of gaming where we asked Tyrone whether it has always been FIFA for him, “Yeah. I played a bit of Pro Evolution Soccer on the PSP and PS2 back in the day but I love FIFA. I’ve never really been a fan of COD (Call of Duty) or GTA (Grand Theft Auto) or anything like that”.

Before we bid farewell, we asked whether Tyrone has any tips for us mere mortals as to how we can improve our own FIFA game. He said that “FIFA is a simple game. Just learn the game dynamics, learn the basic skills. The better players you play against, the better you get”.

All at Shamrock Rovers F.C. wish Tyrone the very best of luck with this first game tonight at 6.30pm against UCD.

The top two players from the eLOI will qualify to play in the EA SPORTS FIFA 21 European PS4 Play-Offs to be held later this year. Additionally, the winner of the new eLOI will go on to be one of two designated representatives to play for the Republic of Ireland in the FIFAe Nations Series 2021 when they will go head-to-head against the top FIFA esports nations in qualification in May 2021, playing to reach the Grand Finals in the Autumn.

Announcing the FAI’s entrance into the esports field, FAI project lead Robert Garrigan said: “This marks an exciting start for the FAI with our first venture into the world of esports. We’ve seen huge growth in the participation of our Irish footballing fans in the esports space and we can’t wait to put Irish players on the map in the FIFAe Nations Series and via the brand new eLOI.”

League of Ireland Director Mark Scanlon added: “I wish all the participating clubs the best of luck in the new eLOI tournament and look forward to seeing them going on to represent Ireland on the global stage. I’d also like to extend a big thank you to FIFA and our partners EA SPORTS in making this possible.”

Shamrock Rovers Director Mark Lynch said that: “Shamrock Rovers is very excited be involved in the eLOI and to develop our footprint in gaming and present the club to a new audience through a new medium. We had a great qualification tournament with the help of Trevor Keane, Killian Maher-Dunne and Dan & Brendan at Rivals.com. Tyrone came out on top and will be a very strong contender in the upcoming tournament, and we are behind him all the way.”

The Football Association of Ireland are joining the eSports revolution with the launch of their first ever eLOI competition for League of Ireland clubs and the Republic of Ireland’s entry into the FIFAe Nations Series 2021.

All 20 clubs from the SSE Airtricity Premier and First Divisions will participate in the exciting new eLOI competition from April 6th with a live broadcasted final scheduled for May 10th, 2021 in a tournament that will come under the official League of Ireland umbrella.

Additionally, the winner of the new eLOI will go on to be one of two designated representatives to play for the Republic of Ireland in the FIFAe Nations Series 2021 when they will go head-to-head against the top FIFA esports nations in qualification in May 2021, playing to reach the Grand Finals in the Autumn.

The second Republic of Ireland player chosen to represent their country in the FIFAe Nations Series will qualify via an open online tournament, the FAI eCup which will run across Ireland on April 1st, April 8th, and April 15th with the winner of this qualification series playing in May’s qualifiers.