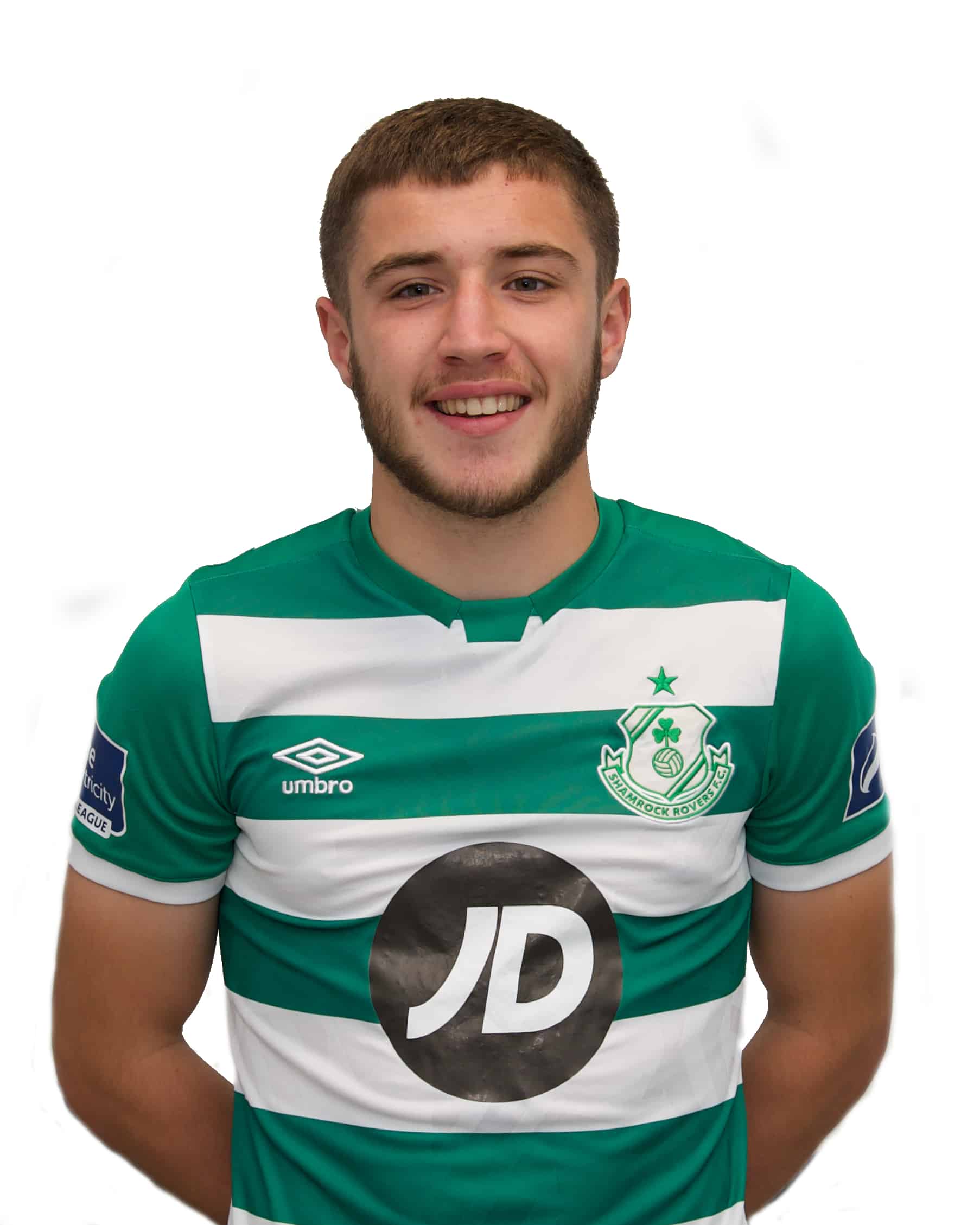 Alex Dunne was an outstanding performer on a team of outstanding performers with the Shamrock Rovers Under 15 team in 2017. That was the inaugural year of the FAI Under 15 League and Alex got the SRFC Player of the Year. Each year since then Alex has continued to make progress with the Hoops. Still only 17, he took a step further in the League of Ireland First Division earlier this year but a bad injury was to put Alex out of the Rovers II team as the season was approaching an end. It’s also worth mentioning that Alex got 566 points after doing his Leaving Cert at Ashfield College, a serious achievement given that he was also training in the mornings with Shamrock Rovers. He gave this interview to Robert Goggins.

Alex, tell us when did you suffer your injury?

It happened in September. We had played Cabinteely on Friday night and we were due to play Drogheda the following Tuesday but I got injured the night before in training. I had a few problems with a strain on the inside of my knee and I couldn’t straighten it. I had to wait two months and do some rehab exercises to make sure I could get the straightening back into my knee and then I was able to have the operation on 18th November.

How did the injury actually happen?

I was backtracking and I had a lad outside of me and a player on the ball went on the inside, twice I turned to make a tackle and I put my leg across him and whatever way he ran into my knee it twisted and I felt something go, I felt a pop.

Were you in a lot of pain for some time after that?

Yes, it was painful. I didn’t know really what it was. I felt something; I wasn’t sure if it was my leg or my knee, I couldn’t straighten it and I hadn’t a clue what was going on.

How was the injury diagnosed then?

I had to get an MRI the next day. My knee totally blew up so I knew it was something to do with my knee. I just didn’t know what it was but I got a call from (Doctor) Alan Byrne that night to tell me what it was. He told me I would have to go and see the surgeon, Maurice Nelligan and then I saw him in the next week or two. He had a look at my knee and told me it would be another six to eight weeks before I would have the operation because I hadn’t got a good enough range of motion to be operated on.

Where did you have the operation?

At the Beacon Hospital on 18th November.

What was involved in your recovery following the operation?

The first week was basic, just making sure that the blood was flowing through my knee. I wasn’t able to move that much, it was just a case of pointing my toes up and down and trying to move my knee a bit by bending it. As the days went on it got easier and I was able to lift my leg and get a little bit of a bend. It’s a month this week and now it’s just doing exercises to get that full range, to get that hyperextension in my knee and to get the bend back; it is more or less what I was doing before the operation. It does feel when I am doing the exercises now that it is a lot easier than when I was doing them before as Tony Mac (McCarthy) was telling me that the work you do beforehand makes it a lot easier after the operation. I do feel that doing that beforehand has benefitted me because I am getting the range back a lot quicker now.

You were flying with the Rovers II team when you picked up your injury. You must have been very disappointed?

Yes, I was. I don’t think it’s nice to get this type of injury at any time of the year but coming up to the end of the season I definitely would have liked to have been involved in those last few games to finish off the season. I think we were very unlucky against Cabo a few days before; we had a few poor decisions from the ref. I was looking forward to going into the Drogheda game and then it happened but these things happen.

Do you think you had been improving much this year with Rovers II?

Definitely. There were lots of learning curves. Being a full season in a senior league was tough physically and mentally but at times we showed we were able to play against the top teams in the league and at the end of the day, we were unlucky with results in some of the big games. There were periods when we played really well but we didn’t take our chances and we ended up conceding a free kick or a long throw-in. We ended up shooting ourselves in the foot in some games but I do feel we played really well in the games at times and if we had taken our chances we could have got a lot more points on the board.

The team had come close to getting a win before the first win came against Wexford at Tallaght Stadium. How did the players feel after beating Wexford?

It was good; we all knew it was coming. It was going to come at some point; we were struggling for goals at the start but we kept at it. We knew we had the quality; we could see it in the games, we were just very unlucky. The first game and win against Wexford were good. We knew there was better opposition in the league than Wexford and we expected that win from ourselves but we just wanted to move on and take it in our stride and try and get a few more results along the way.

Had there been no Rovers II you could have continued to play with the Under 19s. Had you any reservations playing in the First Division given that you were still only 17?

No, I had done pre-season with the first team and I had played a few pre-season games with them so I played against some First Division teams. I know pre-season isn’t the same but I had a taste of it and training with the first team also gives you a taste. I was definitely ready for the league this year. I do feel we could have done a lot better. We could have performed better at times but I think that comes with the games that you play. Towards the end of the season, I thought we were a much better team than what we were at the very start. I don’t think I felt phased; sometimes maybe physically I found it tough but as the season went on I got a lot better.

You joined in 2017 for the then Under 15s. Does that seem to you now like such a long time ago?

It does yes; a lot has happened in the past three years since I was with the Under 15s group, through the Under 17s and then the Under 19s last year. We won the Enda McGuill Cup last year but I would have liked to have won a bit more over the past couple of years. A lot has happened over those years but I have learned a lot and I am very grateful for the opportunities that I’ve gotten.

You mentioned the Enda McGuill Cup there. The year before the team were beaten by Bohs in the league final; was it particularly satisfying to beat them a year later in the cup final?

Yes, definitely. We were missing a few players in Dalymount. Some of them were on the bench for the first team for the (FAI Cup) final the next day. We were missing Thomas (Oluwa) and Kian (Clarke) and Stephen (Rice) was trying to get the game delayed because he was away doing his Pro licence so we didn’t have him either. We went into the game and kept our heads up and the lads that were there did the business. We beat Bohs 4-1 that day and I thought we played really well. It’s a great feeling winning trophies and hopefully, it’s something we can keep doing over the next few years.

Where you now education-wise?

I was at Ashfield College and did my Leaving Cert there last year. I’m now in college at UCD studying architecture. I have a few assignments due at the end of this week and then I am finished for Christmas. Everything is going good with that. The two years I spent at Ashfield were very good and enabled me to get what I needed from the Leaving Cert and move on to college.

What are you hoping to achieve on the pitch next year?

I’m hoping to get this full recovery done and get back playing, hopefully midway through next season. I want to get myself back fit and up and going again and when I’m at that stage I will be looking to improve certain aspects of my game. I’ve been watching videos of myself over the past few weeks and what I was doing in the First Division and looking at where I can improve. I’m just raring to get back fit, back healthy and make sure my knee is right and then I can start improving on those little bits that I know I can improve on.

How long will your recovery process be?

Usually, the injury might be seven months but because I am so young it will take a bit longer because with the reoccurrence rate for younger players being a bit higher I will need to take that extra time to make sure I am right.