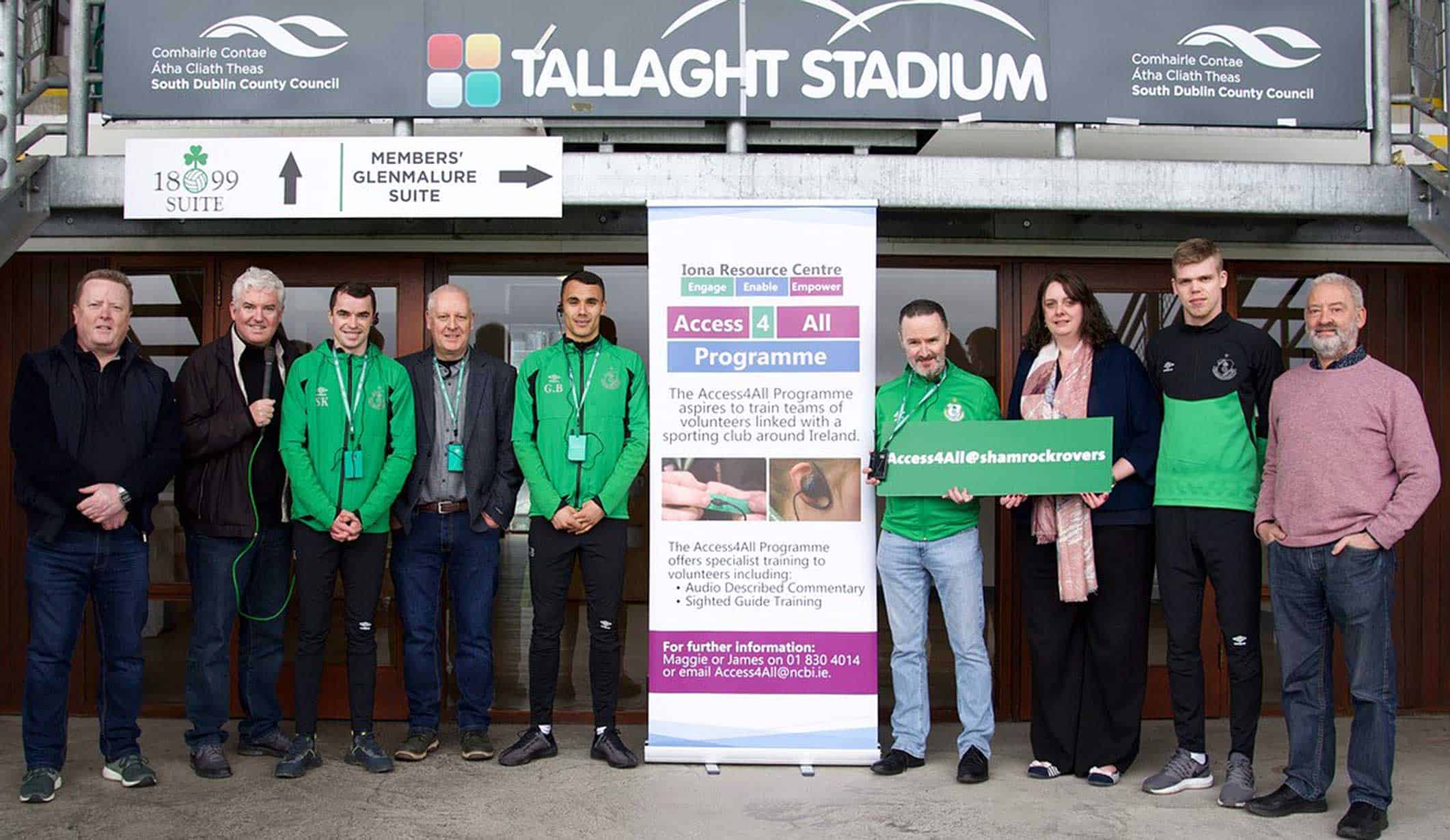 The club was delighted to partner with the IONA Resource Centre/NCBI to provide live described audio commentary at home games in 2020. Unfortunately with lockdown we didn’t get started in March but we got together in September and are now covering games at home and away for the visually impaired. This is a part of our Access4All programme at Tallaght Stadium.

Here follows an interview with one of the volunteers in providing the commentary, Phelim Warren:

Can you tell us what Rovers’ audio described commentary is about?

In February the club announced through social media that the IONA Resource Centre, with the NCBI, had reached out to Rovers and I think to other clubs, to provide commentary for blind or visually impaired fans at the games. The plan was to reach out to people with visual impairments who might not otherwise attend live matches and provide audio descriptive commentary. The visually impaired supporters would come to the game with a carer if required and sit in a group of ten or however many people with headsets on, and there’d be a trained commentator there in audio descriptive commentary. They’d go through to the match so they’d feel part of it; they could feel the tension rising in the crowd, they could hear the whistle blowing and hear the songs and the commentator would describe the action as clearly as he can. The commentator would describe the surroundings – the size of the crowd, the flags and banners, the fans jumping up and down, are there disagreements on the touchline?

How did you get involved yourself?

How it began was that Mark Lynch from the club approached NCBI to partner with them on offering the service at Tallaght Stadium. The club asked for volunteers to be trained in audio descriptive commentary. Six of us applied and we attended the course in February at Tallaght Stadium. We had two trainers from the NCBI, Maggie Richardson and James Flanagan who was co-commentating with me at the Bohs game because he’s a Bohs fan. So they gave us a one day course in audio descriptive commentary.

How did people find the training, did some adapt to it better than others?

Sadly, we were all set to go and the Finn Harps game (postponed in March due to Covid-19) was the first game that it was going to be rolled out. We were all invited to commentate on the Barcelona v Real Madrid game for ten minutes and the key to this commentary is to map the ball. You don’t necessarily have to know the players’ names but map the ball. Is it near side or far side, the right or the left? Is it in the middle third, the defensive third or the attacking third? It’s not ‘high up the pitch’ or inside left or inside right because they don’t know where that is. It’s very challenging mentally to do this so when the course finished we were encouraged to watch a match at home and commentate ourselves. Like most things, practice is where you get it.

So you really had to adjust your thinking as you watch a game?

Very much so. It hasn’t become second nature to me yet because Bohs (on September 5th) was the first game that I was able to do it but it’s map the ball and describe what’s going on. Whether it’s a high ball or a long ball or if the player has spaces in front of him. If the corner is from the far side or the near side and who is in the penalty area. There were some disagreements at the end of the Bohs game and I had to say ‘Trevor Croly has gone made here’. I had some nice advice from Con Murphy and he said that it’s so different from TV commentary, where you can say ‘Jack Byrne, that’s a good ball in and it’s a goal’. That’s not the way it works with audio descriptive. It’s ‘Jack Byrne is on the ball, he plays it to the left and the ball comes into the area, and the header comes from so and so and the keeper dives to his right.’ Con Murphy doesn’t have to say that on the box. So it’s very challenging but I found it really rewarding the first time. James and I took 15 minute slots and he took the first 15 minutes so as well as watching the match I was listening to how he was describing it. We all have different styles but I was able to pick up what we should include.

We’re encouraged to be biased! I’m a Rovers fan so when we have people in we’re encouraged to make it fun and make it intense. Be excited and get the fans excited. So if you’re a Rovers fan, be a Rovers fan as well as a commentator. You’re careful with the language because you might have younger fans there but there’s no problem being biased. The feedback I got was that you could tell I was a Rovers fan without rubbing the other guy’s nose is in it. James is a nice fella so I couldn’t really rub his nose in it too much but there was a bit of banter.

The club has heavily promoted the service, which is good to see because it’s a brilliant initiative isn’t it?

It’s fantastic and full credit to Mark Lynch and the club for buying into it and investing in the equipment, even though it’s been gathering dust for six months. We obviously haven’t been able to use it because we can’t get fans in. All credit to Mark and the board for buying into it and making it a possibility. We live in an all-inclusive world now as much as we can. Just to come back to the Bohs pilot, they explained to us that it’s not only for people who have been visually impaired or blind since birth. It’s for people who were able to see and attended matches but when they went blind, stopped going. Now they’re drifting back because they feel part of the experience again and that’s very important. They’ve given the feedback to James that they’re delighted to be back at matches because they’d lost that when there was nothing there for them. Now it is there for them and they feel very much part of the match experience and that’s brilliant.

You’ve done a few games now including the visit of AC Milan. That was a great occasion but how strange is it commentating in a near empty ground?

Yeah I’ve been lucky enough to commentate at three now, the 1-0 win over Bohs, the Milan game and the 6-1 against Waterford. Commentating and spectating in a near empty ground is just weird, there’s no other word for it. For Bohs, we should have had a near capacity crowd with the stadium absolutely shaking with atmosphere because this was such a pivotal game in the league race and with Milan, again a probable capacity crowd on a momentous occasion in front of a vast TV audience worldwide. So for fans to be denied access to those games is so disappointing. While not for one minute trivialising the effect and danger of the pandemic and the damage it has caused to people, it’s also important to acknowledge more than ever, the importance of live sport in terms of the social and mental aspect for people. With so many of us, Rovers – or whatever club or sport you support – is a way of life, it’s a must do, a must see. It’s what you look forward to week after week, attending, meeting old and new friends, bringing family, teaching the younger generation the history of the club, the old stories, the experiences and everything that goes with live sport. This has been absent for so many now for seven months. The idea and aim of the Audio Descriptive Commentary was to allow visually impaired fans a chance to share in that live experience, the excitement, the drama, the emotion, the highs, the lows, the banter and the humour and though it has been great for us commentary volunteers to try out our new skills and at least have a radio stream audience, it would be great for us as commentators to look around us and see the reaction of the visually impaired fans during the game. Hopefully we will be able to see it next season if circumstances allow as there is absolutely no substitute for being at the game, none whatsoever, even in the cold, damp and windy nights we’re used to in Tallaght Stadium. I don’t think I’ll ever get used to the Hoops emerging from the tunnel and not hearing a crescendo of noise from the fans welcoming their heroes. That this team is playing the best football since the Four in A Row team only adds to every Rovers fan’s frustrations. Never before has Jock Stein’s words “Football without fans is nothing” rang truer.

Over a thousand people tuned in to the Bohs game at one stage or another. How has everything been going in the last month or so in terms of positive reaction and listener numbers and do you think more clubs will follow suit in the near future?

All the volunteers have had a chance now to commentate on games. James Flanagan from the NCBI, who gave the ADC course, has been a great source of encouragement and support to us in terms of advice in honing our commentating technique and ensuring the radio stream is working and that we are being heard. It’s still very much a learning curve, for me anyway, on how best to relay the action for the listeners, but people who’ve listened in have been very complimentary in how we’ve described the action and that obviously gives us great confidence in keeping the initiative going for next season, be it on the same audio stream or preferably with actual fans back inside the ground. I absolutely would urge all clubs to get involved in Audio Descriptive Commentary. It is critical in making live sport more inclusive than ever, it improves the quality of people’s lives and it generates extra revenue for the clubs – after an initial outlay for the equipment – so it’s win-win really. Again, I want to thank Shamrock Rovers for taking up the opportunity afforded by the NCBI and Iona Resource Centre in making this possible. I hope it can go from strength to strength and see no reason why it won’t, especially when it’s safe again for fans to attend.

This initiative has been made possible with the support of Maggie and James at the Iona Resource Centre NCBI, Nicola Coffey at Tallaght Stadium and South Dublin County Council with its generous funding for the equipment and, most of all, by a group of committed Rovers fans that want to be part of giving this opportunity to other fans – special thanks to the volunteer commentators Denis Donohoe, Phelim Warren, Garret Cooke, Barry Kavanagh and David Hanly. Well done guys!