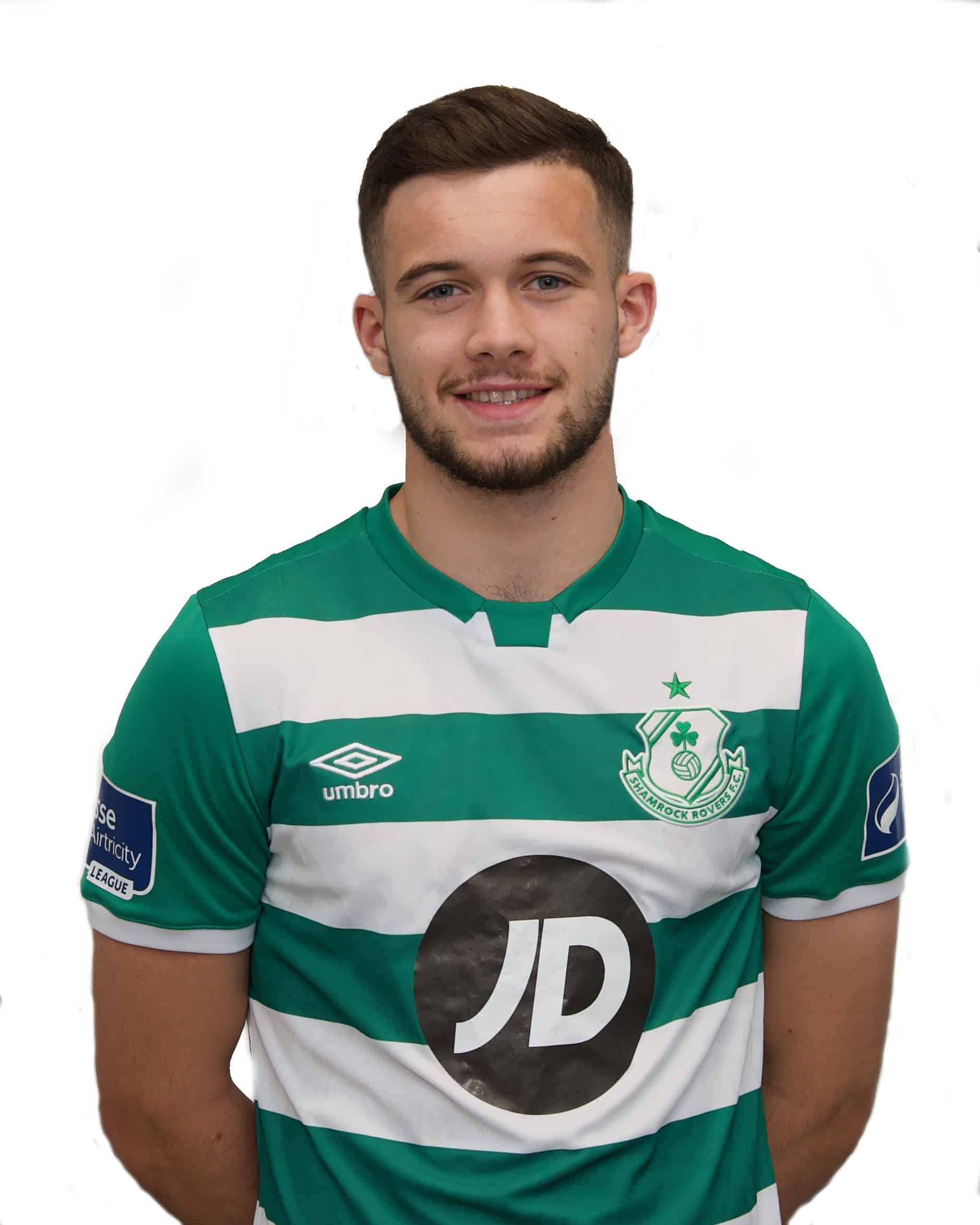 Jordan Tallon has been playing for Shamrock Rovers since he was 11 years of age. In this interview Jordan, now 19, tells us about those early years and how he is facing the challenge of playing at a high level in the FAI SSE Airtricity League First Division.

Jordan, tell us about those early days with the club.

I’m here since I was 11; I signed for the Under 12s at the time under Mick Fitzpatrick. I’ve been here since then. In July I started my ninth year with the club. When I joined the club was playing up in Kiltipper, there were two grass pitches and we had the odd training session there and we also trained at Whitestown Way beside Tallaght Stadium.

It’s fair to say you have seen big changes during your time?

I’ve seen massive changes. We trained out at AUL for a couple of years at Under 14 and Under 15 with Chris and Pat Malone and at Abbottstown for a while also under Stephen Fennell and after that at Roadstone under Stephen Rice and with Aidan Price and Steven Gray now.

So, the Academy has grown as you have grown.

Yeah, exactly. When I started we were in Major at the time which we won, we had been a good bit down but came up to win Major and then under Stephen Fennell we won the Under 15 Super Division when we beat St. Kevin’s in the final.

What club had you been playing before you came to Rovers?

I played for my local club, Hackettstown United in County Carlow; they’re the only ones I played for before Rovers.

Are there any players from that Under 15 league-winning side who are still at Rovers?

There is only me and Martins (Olakanye) left from that team. Andy Spain has recently left but that’s it really.

What is it that you think guys don’t last the pace?

I think there are a lot of demands on players training so much a week, having to miss family occasions and that and I think that can get a bit much for some lads in terms of dedication. Some lads then go and play at smaller clubs where they don’t have to give as much commitment. I would say that is the main factor and having less of a social life especially being young.

As a young person could you explain how much other factors associated with growing up are an influencing factor in this?

Getting a feel for everything as you are growing at this age you take the football for granted but as you get older you begin to settle down; you will be in college or whatever. You will start to realise how much of a chance you missed out if you do follow your own path or don’t take it as seriously as you do when you are at the club. I think this is a massive club and the dedication it takes shows how big it is.

Is it also a case of it being a natural weeding-out process where only the best remain as the years go on?

That’s it. With talent, you have to mix that hard work with dedication. I have seen plenty of players down the years, and thinking back to the first year, me and Martins are the only two that were there back then. Martins left for two years and came back but it’s just mad seeing all the players filter out.

You have two great parents who over the years have brought you up and down to training and playing; do you think some players might not have that same support?

Yes, definitely. My family are all big into football but for some players, their parents are not and might see it as big a chance as my parents do for me. I miss family occasions but my parents have to as well to bring me around, such as weddings and whatever but they are big into it as well and they realise the opportunities you get from Shamrock Rovers and how much I have developed not only as a footballer but also as a person in social skills and whatever, that has been massive.

It seems that at least one between your mam and dad are always at your games?

So, they are missing out on things in their life by showing that commitment?

Yes, and especially now in the League of Ireland the team is travelling up and down the country but it shows too how proud of me they are.

You have played Under 17s & Under 19s previously but what have you found to be the difference stepping up to the First Division this year?

I think the speed of play of the teams you play against is much quicker but we are still a young team and the physicality is a big thing that you notice, especially as some of our squad are just 16 or 17. I’m only 19 myself and I’m still not there yet physically but I think too that each week you come up against something different. Every team has their own way of playing so you see new tactics but it’s the best way to learn. In Schoolboy football teams try 9 times out of 10 to play against you, not keep possession or whatever so it’s a similar challenge each week. In the First Division, you are battling each week; you are playing against teams that want to get promoted and just want to win whether it’s ugly or not. I think that has been a good learning experience, learning each week the different styles each team plays.

It’s easy now to see how some lads don’t want to face that challenge but is it fair to say the opposite is the case with the young lads in the Hoops’ First Division squad whereby young lads do want to get onto the team?

Exactly. You see when we have a few injuries you see younger players coming up to play and while they are nervous, they really want to come up and take their chance. I haven’t played every game, I have played a couple of games with the Under 19s and I’m always wanting to get back into the First Division team each time because that is where you want to be, playing senior football in the First Division or whatever to get that experience and to get noticed.

It’s probably fair to say also that Rovers are playing the best football in the First Division but what do you think has been the best side in that regard that Rovers have come up against this year?

I think UCD when we played them away. They were very good; they matched us with the ball. They were very good and their press I thought was very good. As a footballing side, they take pride in their football. The other teams just want to win even if it is winning ugly which is not a bad thing either but I think UCD would be up there with us especially as they are such a young team as well.

Would you say it is a very hard-going division?

I think it’s a lot more percentages more so than trying to play football and it’s more running. The higher you go the more technical it is as it is if you were playing in the Premier Division.

Have any of the opposing players paid any compliments to you after a game?

One that stood for me was Marty Waters from Cabinteely. It was back in March and we were all coming off the pitch together and he came over to each one of us individually and gave us praise on how we played and the brand of football we played.

The team have lost a couple of times to last-minute goals; what’s it like in the dressing room when that happens?

There’s a lot of frustration in the dressing room whenever that happens. Players react differently. Some lads stay quiet, others throw stuff around. At the end of the day when you look back at the game, you realise it is a learning experience with those late losses. Aidan (Price) says we are right to be disappointed but the way we play we need to just learn from those little mistakes, how to see out games and get points on the board.

What’s the philosophy Aidan Price and Steven Gray instil into the team?

Because we are such a young team they just want us to play and to play to the best of our ability. They follow Stephen Bradley as in they want us to play out from the back, always want us to keep the ball, to get players into their half and to have proper attacking football. They give us the tips that we need for when we are defending or seeing out results. When it comes to playing they take the reins off us and just let us play because we are so young.

Do you think the team have done enough to justify a place in the First Division next year?

All of you have gained a lot of experience from this year. Do you think the squad would be better placed to participate in the First Division next year?

Yes, I think this years’ experience will help us to rectify mistakes such as conceding last-minute goals and how to see out games and that. I think that would give us a big edge next year; we have been very competitive in our games and without those late goals conceded we would have way more points in the table. The physicality would also be bridged, especially with a good pre-season under our belts and knowing what we would be facing would also be a big help for us.