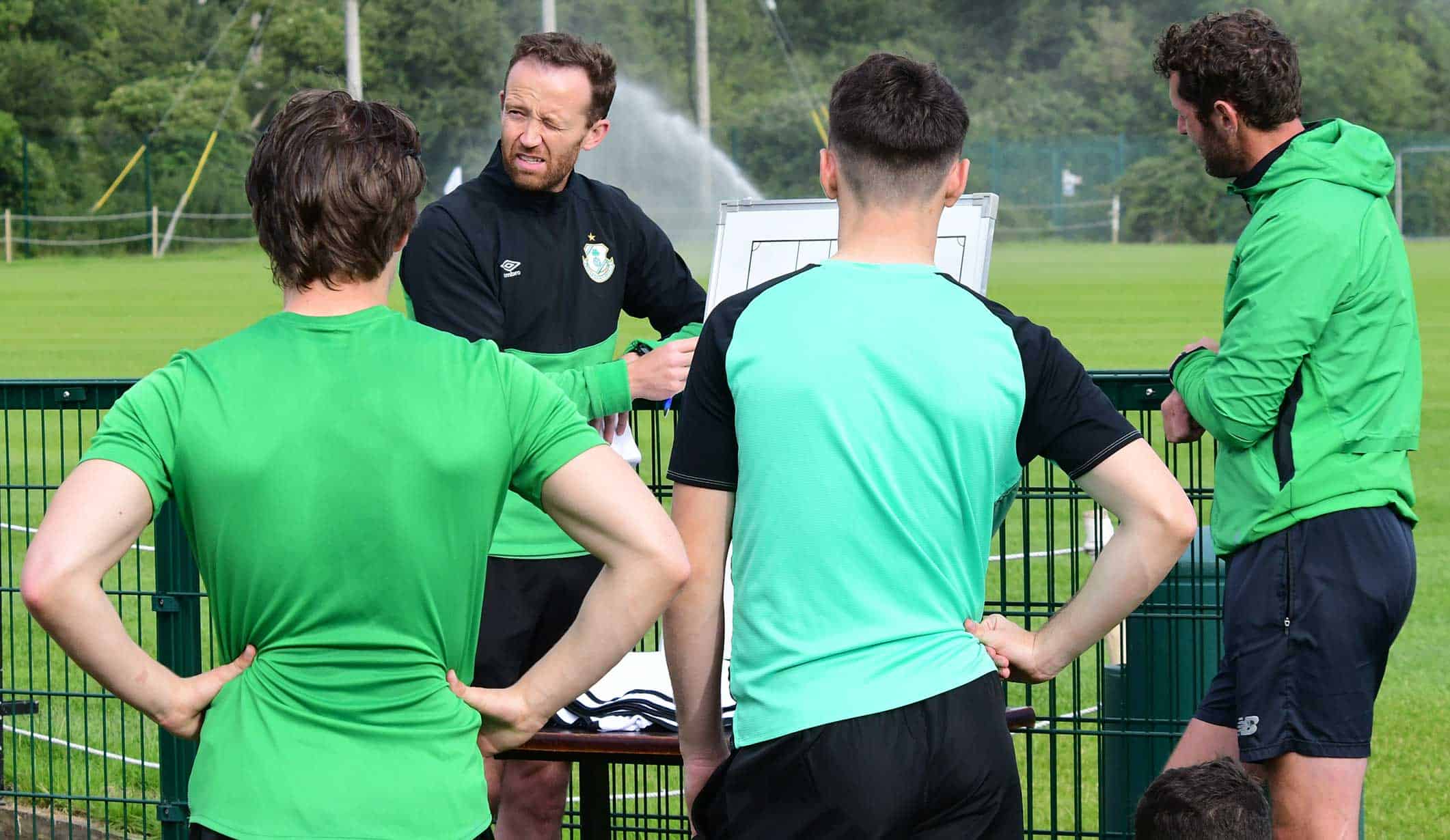 “The first day back felt like Christmas morning” – Aidan Price

Following on from our recent Academy interview with Shane Robinson we caught up with Aidan Price, who apart from his role as head coach of the First Division team, is also one of the key figures on the coaching staff at the SRFC Academy.

The time during full lockdown brought about by the Covid-19 virus was maximised by the coaching staff as fully described by Shane in his interview. This was a theme carried on by Aidan Price when he spoke to www.shamrockrovers.ie last Friday night. ‘Aido’ gave us an idea of what it was like upon making a physical return to the Academy base at Kingswood:

“We came back in small groups at the start, it was nice to get to see some faces again and get them mixing together”, he told us. “We done a lot of work away from here, we did a lot of Zoom work and the players were working really hard individually. It was good to see that their own motivation was at a really good level. Just to get back at any sort of level at the start was nice and obviously we have gradually been able to increase it up to where we are at the moment which is being able to do some inhouse games.”

The Academy teams, and most specifically the League of Ireland underage teams, were on the cusp of beginning their competitive season when the total shutdown was imposed by the government. There was an unusual feeling of eeriness across the country as people faced into an unprecedented time and a real fear of mass loss of life. Even so, as the months dragged on and normal life was all but curtailed people generally began to feel frustrated with not been able to get on with things. Price agreed he felt some frustration but it wasn’t time completely wasted.

“Not been here obviously because you are not able to have that interaction and camaraderie that you really want to have with the players. We were coming into the period where the kids were really enjoying themselves, when we have the nice weather and when we have the brighter evenings so we felt we missed a little bit of that. In terms of frustration, I wouldn’t say frustration in the players development or anything like that because there was a lot more focus on the individual which sometimes can be difficult to analyse and help with all the time so it felt very personal between us as coaches and each individual player because we were getting to see and focus on what they were doing, how they were developing and what they needed to work on at all ages. The frustrations of not been here together were helped by the fact that we were getting to see how well they were progressing and how well their own motivation to work on certain aspects of their own game.”

As coaches the staff themselves learned a lot during this period: “Absolutely. I think it has shown that our focus can definitely give them more stuff to do that they can do away from here. It has shown that they are able to do it and how it benefits them although we think that when they are up training we try to get them training as much as we possibly can and maximise their potential but it has shown that we can actually do more. It doesn’t have to be as taxing on the parents maybe bringing them to training. That focus and that self- drive has to be there from the players to still want to improve, to still have that interaction with them even when they are away from here, it could be their homework programmes or individual plans and that whatever that might be whether that’s ball mastery, whether it’s technical, tactical or whether in general it might be just fitness work. We’ve shown we have been able to touch on all bases of it and we’ve seen the ones that really wanted to do it, they’ve come back and they’ve shown the work has been of benefit to them. Then there’s others that have found it a challenge but that’s ok because we all learn and we all have motivation in different ways. We understand some like to be in a team environment to get their development and stuff so it has shown us loads of different ways that we can learn as coaches as well as the players.

“It’s given us all an opportunity to assess how we coach and how we communicate. It has brought another level of communication between us and the players and have that interaction with them and obviously we are at a time where we can do Zoom calls and you spoke yourself about YouTube, there’s loads of different ways we can interact with the players and it doesn’t just have to be face to face anymore, I suppose this generation are mostly stuck to their phones anyway so it’s another opportunity for us to maximise that potential. We would have touched on that anyway but with the pandemic that exaggerated it to a new level.”

Despite all that was achieved, and the coaching staff deserve tremendous praise for what they managed to get out of the young stars during the lockdown, nothing really compares to be there on the training pitch working with your own group of players and seeing the progress they are making as well as being able to speak to them, teach them and instruct them in person. Imagine the feeling of walking back in through the gates of the Academy for the first time after everything had suddenly come to an abrupt shut down.

“The first day back training definitely felt like Christmas morning, it was really nice to get that feeling of getting the footballs out and getting all the gear ready and cleaning it down, setting up sessions and stuff and having the boys coming in. It has been really enjoyable and it has been great to see the kids all ages coming back up with a smile on their face and that enthusiasm to show off what they have learned, what they have been working on and they all want to show how well they have developed on certain things.”

As mentioned at the outset, the Academy isn’t Aidan Price’s only brief at the club. While the League of Ireland underage teams had not begun their competitive season before lockdown the First Division team had having played against Longford Town, Galway United and Cabinteely F.C. A lot of hard work had gone into preparing the team but at least they got some games in and, although only brief, this gave the opportunity for the management to see the players perform in a competitive environment.

“We had a couple of games and in the short space of time that we’ve had the team in the First Division they had a lot of things thrown at them already like were they or were they not going to be in the First Division, the terrible weather that we had against Galway, we had players suffering and showing how hard they wanted to get through that and coming out through that difficulty to get the disappointment of a last minute defeat against Cabinteely having fought really hard to get something from the game and that to be the final game before everything went into shut-down has been a crazy time.

“It’s a good challenge for them. They worked hard in the couple of weeks before coming back, you can see their enthusiasm to learn and to improve has been evident so just getting them back on the pitch and getting them working on some more of our patterns of play and how we want to do things together is our real focus; just getting them more into their football actions because we’ve done a lot of general fitness work and technical stuff but nothing replicates that 11 v 11 environment, twisting and turning and getting shots away and stuff, the body feels it so they’ve adapted quickly. Touch wood we might need to make sure we’ve been monitoring it carefully so we are not picking up any injuries and that. It’s been good so far; it’s just getting them back ready to play and hopefully that will be, come the end of July.”

(In an interview with Robert Goggins)