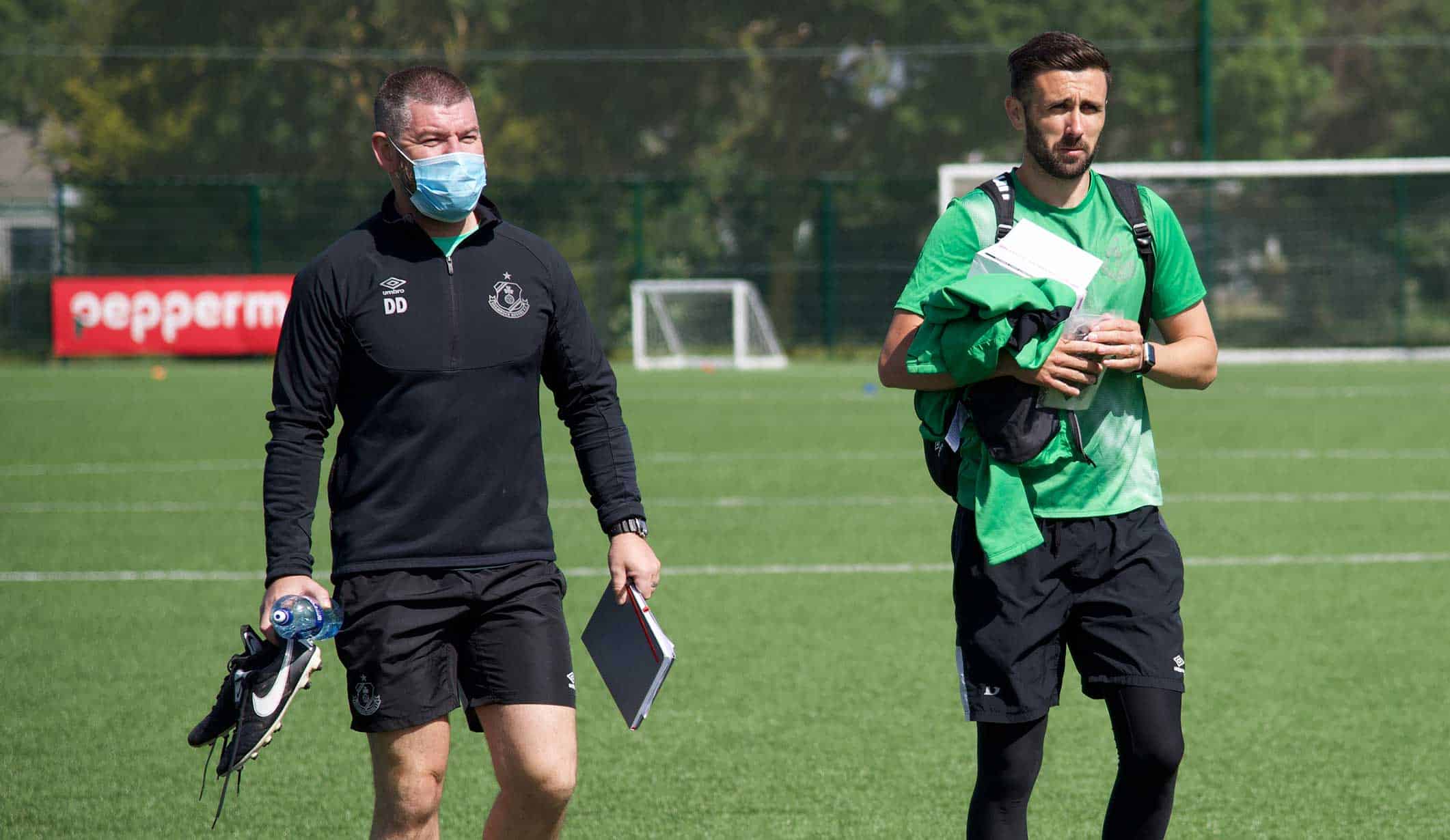 Speaking with Shamrock Rovers’ Strength and Conditioning Coach Darren Dillon, Macdara Ferris got the lowdown on how the club managed the players’ fitness during the football hiatus of the enforced coronavirus break and how, away from the pandemic, Dillon works with the squad on a daily basis.

“It was eerie,” said Dillon about the abrupt stop to the season back in March. “We had been due to play Finn Harps on 13 March and right up till the day before the game, we had prepared as normal. When the Harps game was cancelled, I left the training ground and went straight to the gym and met my own staff (at Kickstart Fitness). That day I put an announcement out we were closing the doors and hopefully we’d come back in a few weeks but it turned into three or four months.”

With an unknown return date for football, Shamrock Rovers initially gave the players some time off. “We talked about maybe keeping going but when we went into lockdown we didn’t know when we were going to come out. From a training point of view you need a start date (for the return to play).

“It becomes generic training then otherwise which is fine for the general population but in performance sport, you need a plan for when you are going to peak and when you have high intensity cycles. With generic training, performance athletes recognise it straight away. They understand this is bull basically!

“You don’t want to do that. We trust the players 100%. We knew we could send them away for a couple of weeks downtime and they would just keep ticking over. We started to get rumours of a start date around this Top 4 competition and we saw the Bundesliga come back. We reached out to the players to bring the group back together. I wrote out a programme that would suit all the players that we could deliver on Zoom with the minimum amount of equipment that we had.”

Having gone through a pre-season build up in December and early 2020, the Hoops are now back into what is effectively another pre-season ahead of the return of the league – with the first few weeks of this second pre-season all being done over conference call. “For the usual pre-season, our players are on 52 week contracts and with my gym just down the road from Roadstone, we have full access to that. We can bring our players in five to six weeks before pre-season. At that time most other teams are on holidays.

“Off the back of each player’s needs, his position, his gym age, his mobility, his functional movement – all these things we assess, we assign a programme based on what he needs. We have that time over five to six weeks at the start of pre-season when we can correct any mobility issues, from a power, speed and strength standpoint.

“By the time we roll a football in front of them they are so pissed off with being inside a gym that the level we get to really early on in pre-season is frightening! They are so hungry for football. It is brilliant to watch – you are almost watching 22 animals who have been caged up in a gym for six weeks!

“When we started the sessions (by Zoom), it was very different than doing that stuff in the gym. We don’t have the weight equipment. We were doing everything with minimal equipment and doubling up on the volume. It didn’t have any negative effect on the bodies but we are not hitting the levels we’d be at in December or January.

“I’d start the zoom call and sit back for five minutes and allow them to shoot the breeze. Then we get going and they are able to see each other doing it and I can see them so I can correct form. I can also keep them going for those extra couple of sets for reps that they probably wouldn’t do if they were on their own.”

Thankfully now the team are back training together in Roadstone for the last few weeks and Dillon can return to the more normal strength and conditioning work which is always tailored for each player. There is also critical work that he manages around injury prevention, particularly around hamstring injuries.

“The first thing I do with a player when he comes to the club is a functional movement screening. They are a set of movements that are specific and relevant to football and if he can’t achieve a full range of movements for those motions, it helps me design a programme that can correct whatever issues he is having so he can get into those positions.

“We do body composition testing, weight, body fat and strength tests. We never want players to get big and bulky. We want to build strength to transfer across into power and speed. From a distance and intensity point of view, the players wear their GPS tracking units during every training session and game. We know the levels they need to hit in a training session on a Monday, Tuesday, Thursday and in a game.

“We look to work with a high level of professionalism – with standard practices every morning from time keeping to weighing in, to doing their hamstring testing. Hamstring injury is the biggest injury in football and it is most difficult to prevent. We have this Nordic testing machine that we use. We do a couple of different reps of an isolated hamstring exercise every morning. If the test numbers fall way below what they normally test, we would have a conversation on any pain that they might have, does the player need to limit the load that day or even be pulled out of training.”

Dillon has been working with Rovers since late 2016 having worked previously with Rovers’ underage teams. “I had actually been working with a bunch of the Dundalk players at one point five or six years ago – Richie Towell, Dane Massey and Brian Gartland. I started to get the Rovers under 12 team into the gym and then the under 19 team came down to me when Stephen Bradley was involved with them.

“When Stephen and Glenn Cronin took over from manager Pat Fenlon, they approached me in Kickstart to see if I was interested in joining up with them. I had always loved going to Shamrock Rovers games and had a keen interest in what was going on as I’m local.

“I am maybe ten years older than Stephen but I’ve known him from Jobstown and I know his wife’s family but when I spoke with him about his plans I was blown away by the level of professionalism and the attention to detail he was talking about – I recognised it as it would be similar to me in running my own business. I thought this is a really good opportunity to get involved in something that is going to be really successful. The time has flown by.”

With games set to return at the end of July, Dillon is also delighted with the fact that Kickstart Fitness is set to re-open this week to the public. “We are reopening on Monday 29 June but we have had small stuff going on over the last few weeks as we were allowed work with small groups and we did some one-on-one. It is all with social distancing and sanitising, but that is just the new situation we need to deal with.”

If you would like to register your interest here to get club updates, click here and we will contact you once information on your selected option(s) becomes available