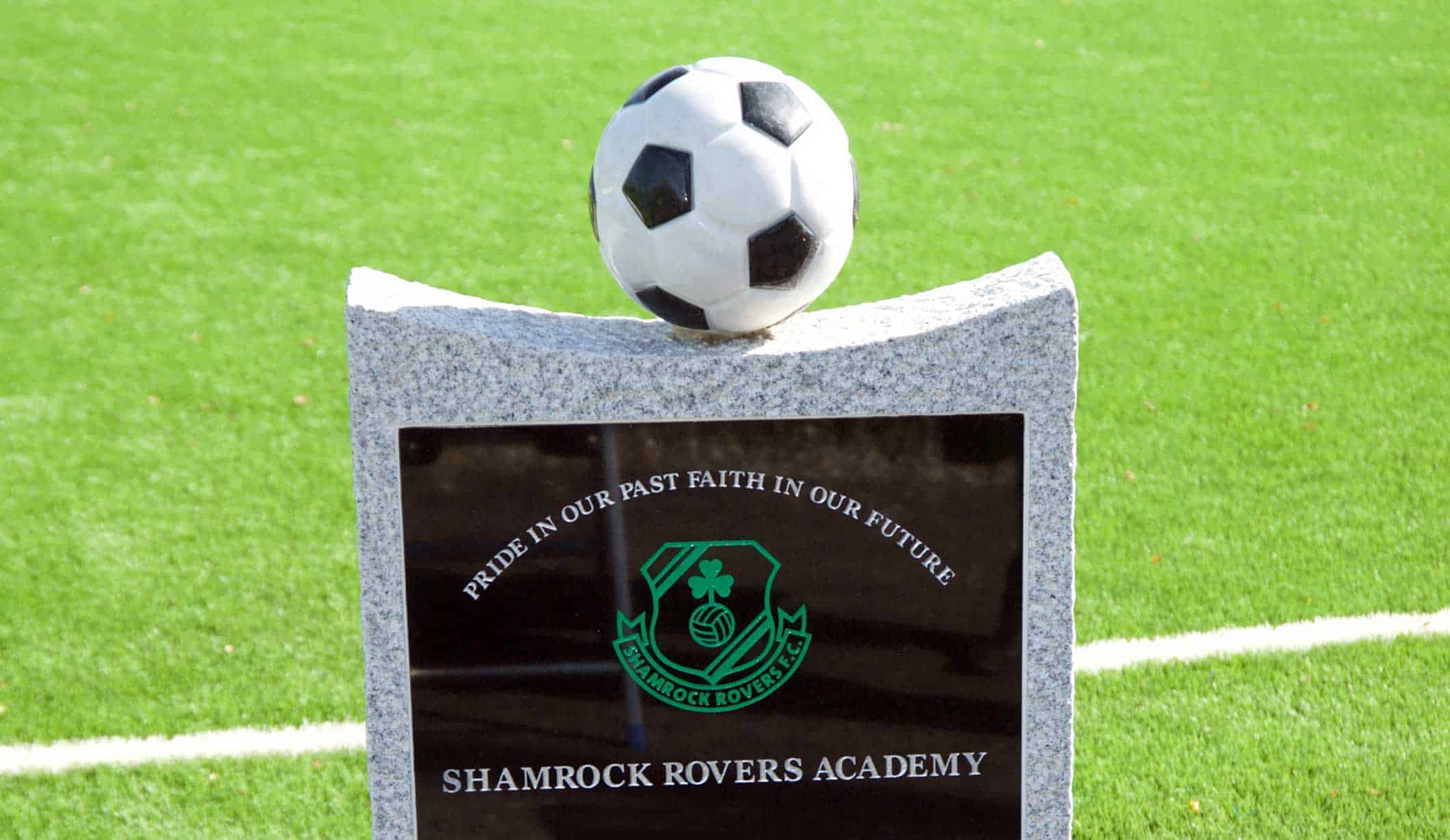 Robert Goggins spoke to SRFC Academy Director Shane Robinson about the return of the teams to training this week.

The League of Ireland underage season was about to begin. Then Taoiseach Leo Varadkar announced that all sport was off due to the rapidly declining situation brought about by the spread of Covid-19 on this island. The SRFC coaches and teams had worked hard to get themselves ready for the new season when the devastating blow came. The DDSL teams were in full mode; all football was off. Everyone knew and understood there was a bigger picture at play and lives were at risk but the postponement still came as a massive blow.

Last week, as the restrictions on movement and activities continue to be slowly scaled back, the Academy saw the return of the coaching staff and players. The venue had lain idle for weeks on end, only the foxes and magpies and such wildlife populated an area that had previously been a hive of football activity. Yes, the humans are back but only for training. Football will have to wait a while longer.

With schools and workplaces also closed families were together at home with most people being able to adhere to the advice of the authorities to stay home. That must have made it very difficult for families but thankfully the weather was exceptional which meant people were not cooked up indoors. For the families of the young members of the Shamrock Rovers Academy there was some football-related activity to get on with. Thanks to modern technology the coaching staff were able to set out drills and programmes for the players to be doing during the lockdown.

“This week is the first they are actually back”, says Shane Robinson, SRFC Academy Director. “They are back to one session a week and then we will see how it goes in terms of phasing things back in.”

Shane explains further how the Academy has managed during the lockdown:

“All of them (the players) would have received three sessions a week in PDF format which would have advised of videos of different sessions to do depending on what age group they were in. They would then send in their own video of that session – a five-minute video. Their mams, dads, brothers, sisters, everybody got involved in terms of recording these and sending the videos on to the coaches. I suppose nobody thought it would be so long but it ended up being thirteen weeks of three sessions at home. We designed the sessions to be done in small areas; it was all technical work as opposed to tactical or physical so it has been really good, probably something you don’t get to focus on as much. They had different programmes, some could be done in their living room and some could be done outside. There were different variations but at the beginning a lot of it could only be done inside.”

The sessions were devised by the SRFC Coaching staff themselves and the response from the players has been rewarding. The process provided a hidden benefit in that the coaches got to see some really amazing stuff from some players, from the very young ages up, and have seen and learned information on these players they wouldn’t have known before. Seeing how different players responded away from the glare of a coach on a training pitch has been an education. While all of the players have been great some in particular really excelled. The U19s, U17s and U15s had slightly different programmes to the younger players, working on aspects of where they are currently in terms of their development. There was a greater emphasis on the physical and aerobic side for them while for the younger players it was more about technique.

Some of the very young players really put their minds to the task and have been exceptional. That has to be very positive for the Shamrock Rovers Academy in terms of future player development.

When An Taoiseach made the critical announcement that all sport was off it really didn’t come as a surprise; it was really just a matter of when the call would be made. Still, everyone was hoping it wouldn’t come to that. The virus came at us at such a rapid pace it was impossible for organisations to have been prepared for it. In those early days of the lockdown Shane Robinson and the SRFC Academy coaches didn’t waste time in putting together suitable programmes and sessions for the players to be doing at home. It started out simple enough but as the weeks went by the whole initiative became a much greater operation.

“The first week we were asking what do we do now”, explains ‘Robbo’, “It was a Thursday that it broke down; we sat around in different groups, myself, Aidan (Price), Steven (Gray) and Pat Deans. In week one we picked some players to do a demonstration for us. So, it would have been a phone call to a parent to ask if their boy could do this session, could he video it and send it on. We then set up a YouTube channel so all the kids could look into those videos. It was private so not just anyone could have looked in. The players all watched and then did their own attempts at that session.

“Then we started to plan a week ahead so we would have another boy doing the next week’s session and the idea grew from there. In the next few weeks we would give them a player to watch, we sent them a lot of German players because we knew the German league was coming back. We gave them some young players they could relate to such as Jadon Sancho (Borussia Dortmund) and then it developed further that we sent them Jack (Byrne), Joey (O’Brien), Ronan (Finn) and Aaron Greene, just to watch and analyse so they had a bit of homework to do in that sense.”

As stated, the lockdown continued for perhaps longer than what was hoped for but as time went by the whole initiative grew bigger and better and became a very slick operation. It took a few weeks to figure out that YouTube was the easiest for the younger players as those age groups would have been used to it. The older age players used Huddle which wouldn’t have been suitable for the younger ones. The videos were available to all though. It could have been a case of a 10-year-old doing a session for a watching 19-year-old to also do. Sometimes a first team player would be showing an 8-year-old what to do. It was for all ages and changed around frequently.

Modern technology has of course made all of this possible. Imagine if the pandemic had struck ten years ago for example.

“We did all our fitness classes by Zoom which everyone is familiar with and that wouldn’t have been the case before the lockdown begun. We did a parents’ briefing before we returned to training. We had two hundred and eighty-four parents in a Zoom meeting explaining to them the protocols that would in place for returning this week. We had no other way of doing it. It’s amazing how quickly people adapt to it. It’s the same as any business, they all just all have to adapt and, as coaches, we too just have to adapt and think quickly.”

Watching the players from the very young age groups up doing the sessions from home has given the coaches an insight into how some players more than others really have the extra drive. The time away from the training pitch has been anything but wasted. Everything has been so different to what were the normal procedures before the lockdown. Before then teams were training three times a week at Roadstone but the enforced break has shown what can be done.

Emotions experienced isn’t necessarily the same for all ages. “I think the 8s, 9s, 10s and 11s embraced it and loved being with their mams and dads and being out in the park doing the drills. I think the parents enjoyed helping the younger kids whereas with the older age groups the players don’t want their parents around and helping them.”

It’s been good for the players themselves to get back to training where they have been able to meet up with their friends that they haven’t seen for months. For the coaches the training has been a little different. With no games there has been a lack of reference points to work from for either individual players or as a group. That can be overcome though and, as the coaching staff have proven, they can adapt to cope in what has been an extraordinary time in our country and the world at large.

“We are just glad that we didn’t stop”, says Shane Robinson. “We kept going and some kids really embraced it and you would be proud of them. Some of the videos that came in were exceptional.”

The DDSL have indicated some form of pathway to getting back to playing. It’s not as clear cut though for the League of Ireland teams. A provisional date of the in mid August has been mooted but confirmation has yet to come. The League of Ireland season is likely to be a very much shortened one but at least the Under 13s and Under 15s have the opportunity of continuing on in the DDSL just as last year’s Under 13s are now playing at DDSL Under 14 level. Not all clubs are in a position to be able to do that for their players and that says a lot about the impressive structure that exists at the SRFC Academy. The meetings in the corridors of power and the speculation as to a restart continues.

“It’s important that we get information from the relevant bodies because we are trying to look after the welfare of our players. There’s a lot of different moving parts and lots of different politics going on at the moment that makes it difficult but we just try to focus on our own group of kids making them better and helping them to be the best they can. I do want games as soon as we can have some in-house games; we would be in a really good position for that. It’s just waiting now for the different phases to be lifted and then we can return to some kind of normal type training; if we could play some in-house games we’re not too bad – hopefully, we are not too far away from that.”