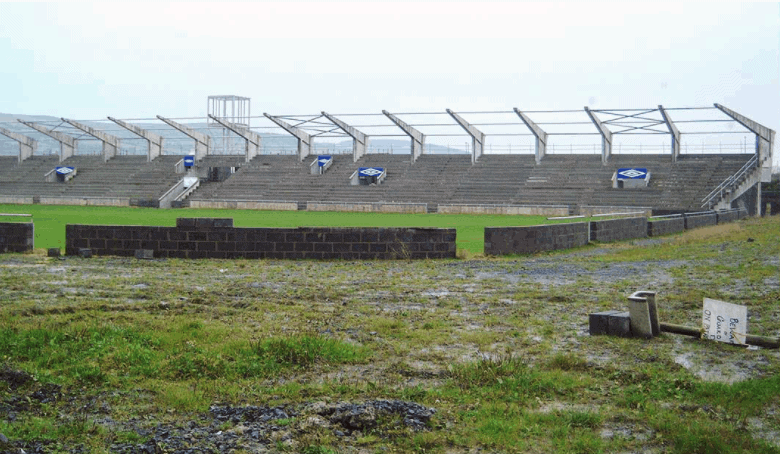 Last week South Dublin County Council announced plans for a €7.7m upgrade of Tallaght Stadium. The proposed works will include some redevelopment of the West Stand and the construction of a North Stand. That new 2,000 seater stand will be the new location for Rovers’ offices and official store.

Subject to approval through the Part 8 planning process, the new stand will see the capacity of the stadium increase to 10,000 – the size first planned for the ground when first announced 24 years ago.

From RDS to the start of construction

Shamrock Rovers finished their sixth season playing out of the RDS in 1996 and it was this year when the Hoops first mooted Tallaght as their new home. The following year South Dublin County Council approved leasing the site to Rovers to develop the stadium. The club was granted planning permission in April 1997 for a 10,000 capacity stadium only for an objection to be lodged by the nearby Old Bawn Community School. An Bord Pleanala ruled in favour of the stadium development in January 1998 – albeit with a reduced capacity of 6,000.

The Taoiseach of the day Bertie Ahern turned the first sod for the stadium in 2000 with working beginning on the venue in October that year. However, financial difficulty saw the construction grind to a halt in November 2001 with the West Stand partially completed. Builders wouldn’t return to the site for another seven years.

During that time the Hoops would shuttle through a range of ‘home’ venues playing league games in Morton Stadium, Tolka Park, Richmond Park, Dalymount Park, Belfield Park and even a home game in Turner’s Cross in Cork in 2003.

The battle for Tallaght Stadium

When planning permission lapsed on the incomplete stadium in July 2013, South Dublin County Council granted the club a 12 month extension. However, when the club applied for a further extension in 2004, it was refused by the council who saw no prospect of work resuming and they repossessed the site in 2005 with the view of finalising the stadium themselves. At this time the club were in financial meltdown and sought High Court protection from their creditors. The court appointed an Examiner to prevent the liquidation of the club and during this time the Council started a public consultation process on completing the stadium. Following the examinership process, the 400 club fans group, along with Ray Wilson, emerged with ownership of the club. The Council continued with their plans to finish construction, with the aim of Rovers playing in the ground under a licence arrangement with the local authority.

The council’s proposal to complete the 6,000 capacity stadium was amended by the councillors initially in December 2005 to modify the stadium to increase the pitch size to accommodate gaelic games. When they reversed their vote the following February after the Department of Arts, Sports and Tourism noted they would not make funding available for such a modification which would limit the capacity of the stadium to 4,500, it began a two year planning battle in the courts.

In May 2006, Thomas Davis GAA club took a case against the council seeking leave to the High Court for a Judicial Review to reverse the council’s decision. Shamrock Rovers successfully applied to become a party to the case. 12 months later Thomas Davis were granted leave for that Judicial Review. The case was heard in October 2007 and two months later the court ruled in favour of South Dublin County Council and Shamrock Rovers. In January 2008 the court refused Thomas Davis permission to appeal to the Supreme Court and the last hurdle for the Hoops in getting to Tallaght was overcome. All this meant that in May 2008, builders returned to the site to complete initially the West Stand.

The new home for the Hoops

Shamrock Rovers played their first game in Tallaght Stadium in March 2009 beating Sligo Rovers 2-1. Gary Twigg had the honour of scoring the first goal for the Hoops in their new home in front of a sold-out stadium.

Construction began on the East Stand in May that year and for July’s friendly against Real Madrid temporary seating was brought into the stadium. On the night Cristiano Ronaldo made his debut for Real, 10,915 were in attendance to see Rovers come within three minutes of keeping a clean sheet against the Spanish giants – only for Karim Benzema to score the winner late on. The West Stand was completed and opened in August that season bringing the permanent capacity at that stage up to 6,000.

In 2011, when Rovers became the first League of Ireland side to play in the Europa League, again temporary seating was erected in Tallaght. This brought the capacity of the stadium during the group stage to 8,500 for the games against Rubin Kazan, PAOK and Tottenham Hotspur.

In October 2016, the council began a Part 8 planning process for the construction of the 2,195 capacity South Stand. Construction began in January 2018 and was completed in November that year bringing the capacity up to 8,000. For the 2019 season, the new South Stand became the home for the singing section of the Shamrock Rovers support.

The council’s latest plans will see the commencement of the planning process on the stadium redevelopment works before the end of this month. This would then see the architectural plans placed on display with a public consultation process to follow. The plans will then be put out to tender to allow the appointment of a builder to carry out the construction works.