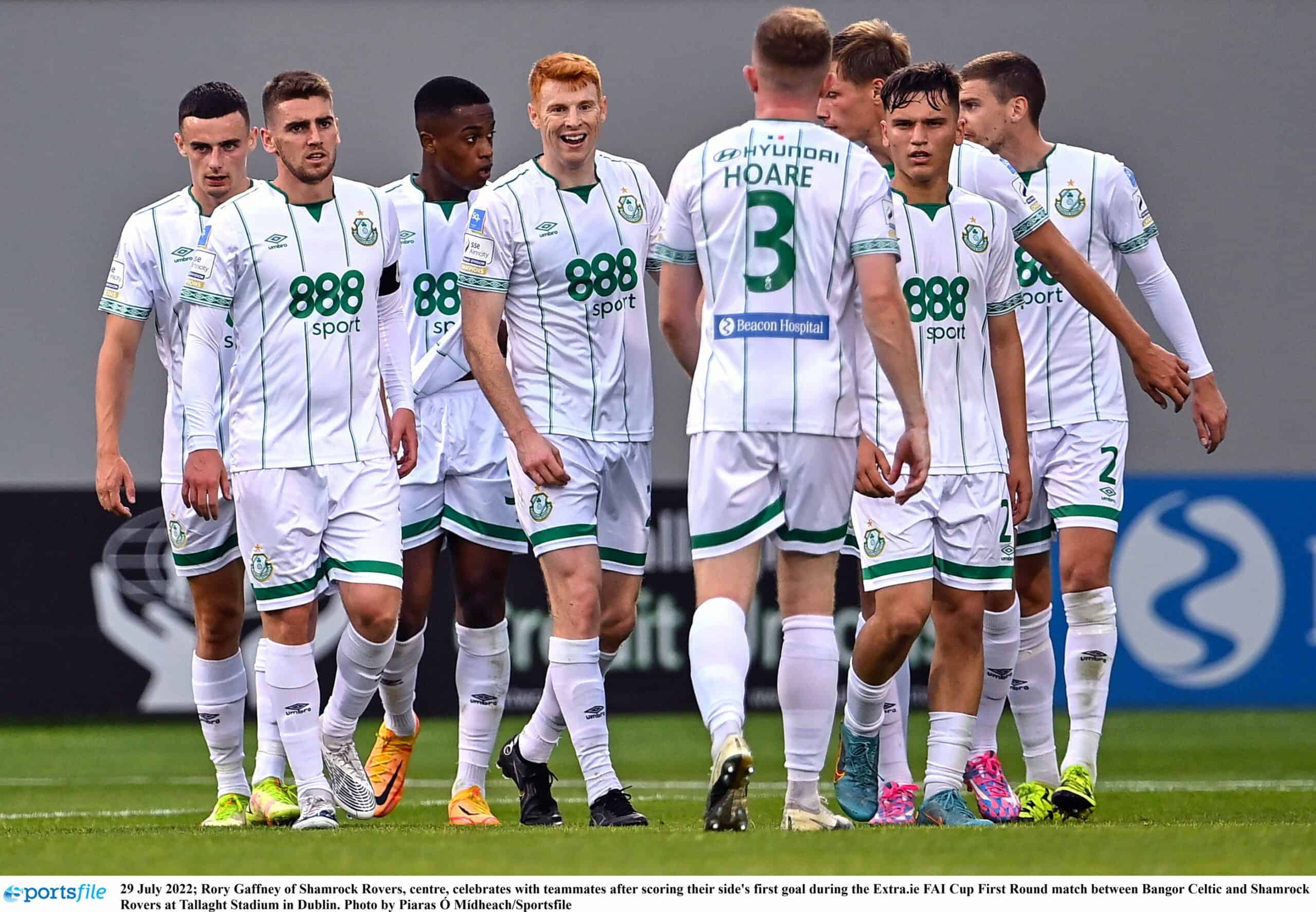 Shamrock Rovers overcame non-league side Bangor Celtic on Friday night as we kicked off our Extra.ie FAI Cup campaign in style. Goals from Rory Gaffney, Sean Hoare, Aidomo Emakhu and Daniel Cleary were more than enough as the Hoops booked their place in the second-round draw after an impressive performance at Tallaght Stadium.

The Hoops made nine changes to the side that lined out v Ludogorets earlier in the week, with only Sean Hoare and Sean Gannon retaining their place in the starting eleven. Daniel Cleary & Simon Power made their Rovers debuts having signed for the club earlier in the week, while Academy player Cory O’Sullivan made his competitive debut for the first team at left wing-back.

The Hoops enjoyed a positive start to the game as we dominated the opening 15 minutes. Neil Farrugia and Cory O’Sullivan both had half chances but failed to trouble Adam Hayden in the Bangor Celtic goal. Rory Gaffney did find the back of the net, volleying home from 10 yards, but the linesman had his flag raised for offside.

Rovers continued to control the game, keeping possession and moving the ball at a good tempo as we looked to carve out a goal-scoring opportunity. And Stephen Bradley’s men came close to breaking the deadlock when Sean Hoare’s header smacked back off the crossbar. For the second time in the first half, Rovers had a goal disallowed for offside, this time Neil Farrugia was adjudged to have been in an offside position as he headed home a Simon Power chip to the back post. Replays suggested it was a contentious decision to say the least.

The pressure on the Bangor Celtic goal was relentless and Rovers took a deserved just after the half-hour mark. Sean Gannon showed brilliant vision to clip the ball over the Bangor Celtic defence into the path of Gaffney whose venomous first-time strike beat Hayden at his near post. Rovers continued to play the ball around comfortably for the remainder of the first half and went in at the break 1-0 up.

The Hoops continued their impressive performance in the second half as we created some early chances through Sean Hoare and Justin Ferizaj but neither could find the back of the Bangor Celtic net. At the hour mark, debutante Simon Power was replaced by Academy player Gideon Tetteh who was making his competitive senior debut for the first team.

Rovers kept pushing for further goals and our persistence paid off with 25 minutes to go when Sean Hoare finally got his name on the score sheet, having come close on a number of occasions earlier in the game.

Dylan Watts whipped in a dangerous free-kick which was headed towards goal by Sean Gannon and after a deflection off a Bangor Celtic defender, Hoare was the quickest to react and found the back of the net, doubling the Hoops lead.

With 20 minutes to go, Rovers made a double change with Sean Jones, making his first appearance of the season and Michael Leddy, making his competitive senior debut for the first team, both introduced in place of Neil Farrugia & Rory Gaffney.

Just 5 minutes later Rovers added a third. Watts again was involved as he played in Aidomo Emakhu whose delightful dink over the on-rushing Hayden found the back of the net, meaning the in-form 18-year-old striker has now scored three goals in his last three games. As the game entered the final 10 minutes, Bradley’s men found a fourth to cap off a brilliant performance. Emakhu did well to find space in the box and cut the ball back to Daniel Cleary who scored a dream debut goal by finding the top corner of the Banger Celtic net.

The Hoops will be pleased with their dominant display as they advance into the second round. Up next for Rovers is a return to European action on Thursday 4 August August as they host North Macedonian side KF Shkupi in the third qualifying round of the UEFA Europa League at Tallaght Stadium.